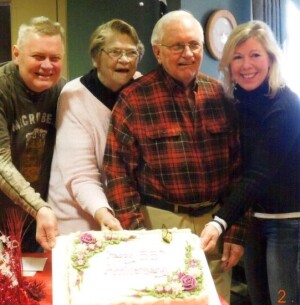 Stanley Leroy Johnson, 81, of Crookston, MN, passed away early Tuesday morning, January 19, 2021, in the RiverView Care Center, Crookston, with members of his family at his side.

Stan was born in Crookston on October 2, 1939, the son of Emil and Elsie (Schroeder) Johnson. The first years of his life were spent growing up on the family farm near Fisher, MN. He attended Fisher Elementary School through the 5th grade. The Johnson family then moved to Crookston where he attended Crookston schools and Our Savior’s Lutheran Church. During these years Stan worked 3 Times paper routes, earning him the honor of being named Outstanding Newspaper Boy. He graduated as a member of Central High School’s Class of 1958 and then began working at the Crookston Mill Works. On May 19, 1959 Stan enlisted in the US Air Force and was stationed at Lackland AFB, TX while attending Air Force Police Training School. He was later stationed at Air Bases in Alaska and Grand Forks. On February 16, 1963 Stan was united in marriage to the love of his life, Betty Jane Hinkley, at the First Presbyterian Church in Crookston. A year later he was sent to Guam AFB, serving with the 4133rd Combat Defense Squadron in support of the Vietnam War effort. Betty and their young son, Daniel, who was born in Crookston, were able to join him there. Eventually the family returned to Travis AFB, CA where Stan received his honorable discharge on July 27, 1966. For his service to his country he was awarded the National Defense Service Medal, Sharpshooter badge, and the Good Conduct Medal.

Upon their return to Crookston Stan was employed with the Pepsi-Cola Company at Thief River Falls, and following a move to the Moorhead-Dilworth, Mn area he worked at Fargo Sprinkler System and Silverline Boats. Daughter, Kathy was born in 1970. In 1971 Stan and Betty returned to Crookston with the kids and Stan worked for the Dahlgren Co. for 20 years. He later drove for Arlynn Seaton Trucking, worked construction for Lyle Wilkens, owned Johnson Trucking, and then drove for Christian Trucking of Fertile. In 1989 he and Betty moved to their Maple Lake home, built by Stan with the help of family and friends. They returned to Crookston in 1999 and he worked as a greenskeeper for Minakwa Country Club until his retirement.

Stan was a longtime member of the First Presbyterian Church and Session, and served as an Elder and Trustee. While in Dilworth he held membership in the Dilworth Presbyterian Church and Session and was also the Church’s custodian. Stan was an avid reader and his personal library included many books about trains, trucks, and building construction. He also loved repairing lawn mowers for family and friends with his brother, Howard. Stan was a wonderful husband, father, grandpa and great-grandpa, brother, uncle, and friend. He will very lovingly remembered and dearly missed.

Stan is survived by Betty, his beloved wife and best friend for over 57 years; their 2 children, Daniel and Lynell Johnson of Maple Lake, near Mentor, MN, and Kathy and Brian Anderson of Crookston, MN; 4 grandchildren: Matthew Johnson (Brittany), of Fargo, ND, Tyler Johnson of Maple Lake, Abbie Anderson and Jacob “Jake” Anderson of Crookston; 2 great-grandchildren, Emmy Johnson of Maple Lake and Holden Lizakowski of Fargo; and brother, Marlin Johnson of Crookston. He also leaves several nieces and nephews including Diana, Brian, Roger, Sandy, Carla (in spirit), Jeanette (JJ), Renee, Sheree, Tammy, Scott, and Robin; other extended family members; and many friends.  He was preceded in death by his parents, Emil and Elsie Johnson; grandson, Michael Daniel Anderson; and siblings: Howard and Verna Johnson, Connie Johnson, MaE Huber, and Mildred Edmunds. May God richly bless the memory of Stanley Leroy Johnson.

A memorial service honoring the life of Stanley Johnson will be held at 11:00 a.m., Saturday, January 23, 2021, in the Stenshoel-Houske Funeral Home in Crookston with Rev. Jeff Brown, officiating. Visitation will be from 10-11:00 a.m. with social distancing and masks required and attendance limited to 70. Military Honors will be provided by the Grand Forks Air Force Base Funeral Honors Team and the Crookston Veterans Council. The service will be livestreamed and may be viewed by logging on to www.stenshoelhouske.com at 10:50 a.m. and going to Stanley’s obituary, then clicking on the prompt to watch the service. It will also be recorded for viewing over the next 12 months.

To send flowers to the family or plant a tree in memory of Stanley L. Johnson, please visit our floral store.