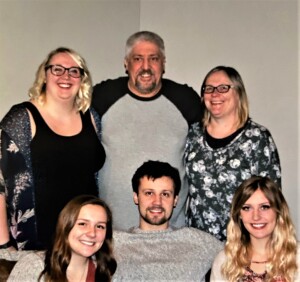 Scott (Bart, Holmes, Old Man, Love of my Life) Morris Solheim, 53, of Crookston was called home on Wednesday, May 18, 2022 from St. Mary’s Hospital Mayo Clinic, Rochester, MN. As in life, Scott was surrounded by his devoted wife, beloved children, adoring mother and brothers during his final hours on earth.

Scott was born in Crookston, MN on March 9, 1969 (the day the world became a little brighter) to Ardel and Marilyn (Overland) Solheim. He was baptized at Hafslo Lutheran Church rural Crookston, confirmed at Trinity Lutheran Church, and raised with his brothers, Al and Jeff. Scott’s mischievous yet quiet nature always made for the greatest adventures and stories. After graduating from Crookston High School, Scott started his college career at Bemidji State University his intended degree to be aquatic biology. During his third year of college he was approached by a friend to head to Chicago to work, this started his career with Barrington Pools. During one of his trips back to Minnesota, he met his other half, his soulmate and life long love, Tracy Anne Jones. After a whirlwind courtship (only 3 official dates) they were engaged and then united in marriage on August 22, 1992 at Our Savior’s Lutheran Church, Cloquet, MN. Together they moved to Osseo, MN where Scott worked for Tropical Pools and Spas in Apple Valley, MN. While there, he and Tracy added Hayley and Seth to their growing family of love. After the birth of Seth, Tracy took a job outside of the twin cities area which provided the opportunity to move back to Crookston in the spring of 1996. They purchased their home and moved in over the July 4th weekend. Scott worked for Elk River Concrete. In 1997 Shelby joined the family with Kylie to follow 4 years later in 2001.

Scott learned at a young age that things wouldn’t always be easy as he lost his father suddenly at the age of 3. His mother and 2 brothers then moved to Amery, WI to spend time with his maternal grandparents, Morris and Luella. During this time, Scott found his love of fishing and continued this hobby throughout his life. Tracy and the kids never had to bait a hook (unless they wanted, which Tracy never did) or take the fish off. Scott would take every opportunity to go fishing and help others find the wall mounters. He was not one to clutter the walls with his trophies instead they were covered with pictures of his family and their accomplishments. Scott was dedicated to his wife and children. He was their biggest fan. He could be seen at every event involving his children. Many people in the Crookston community would look to sit with Scott at these events to enjoy his unbiased commentary. Scott’s presence always brought a ray of sunshine and a calmness. He always saw the good in everything, never looked back on what could be and focused his energy on the present.

Three months after Scott and Tracy were joined in marriage they learned he had IGA nephropathy, a kidney disease that would eventually require Scott to have dialysis and kidney transplant. Scott began hemodialysis in January of 1998. He received his first kidney from his wife Tracy on December 30, 1998. They were blessed with her kidney for 7 years before the IGA nephropathy took it over. Scott then started peritoneal dialysis until receiving his second kidney on September 30, 2008. He was blessed with the use of this kidney until the end. Scott battled throughout his life with many health complications related to his diagnosis yet never allowed this to dampen his smile or witty charm. He continued to work as he was able with local businesses.

Scott was one of God’s greatest creations. He was a loving, generous, witty man of his word. He always followed through on every commitment. Words can never express how deeply his physical presence will be missed. His wife and children were his greatest pride and joy and his spiritual presence will continue around them until they meet again. He will be unequivalently missed.

Scott was preceded in death by his father, Ardel Solheim; and grandparents, Julius and Ida Solheim, and Morris and Luella Overland. Treasured be the memory of Scott Morris Solheim.

The Celebration of Scott’s Life will take place at 2:00 p.m., Saturday, June 11, 2022, at Trinity Point, 15577 N Trinity Point Rd SE, on the shores of Maple Lake, near Mentor, MN, 56736. Visitation with the family will be for one hour prior to the service and it will be livestreamed by going to Scott’s obituary page at www.stenshoelhouske.com and click on the prompt to view. The service will also be recorded to the website for later watching. In lieu of flowers memorials may be given to Scott’s family.

On-line messages of condolence to Tracy and her family may be made at www.stenshoelhouske.com.

To send flowers to the family or plant a tree in memory of Scott Morris Solheim, please visit our floral store.

A Memorial Tree was planted for Scott