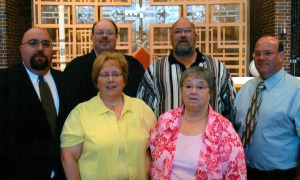 The visitation and prayer service for Rosemary Tate scheduled for 5-7PM today at the Cathedral of the Immaculate Conception has been cancelled. Her Mass of Christian Burial will go on as scheduled tomorrow (Saturday), February 19, 2022, at 11AM with visitation for one hour prior to the Mass.

Rosemary Adele Tate, 84, of Crookston, MN, passed away late Thursday morning, February 10, 2022, at the Benedictine Living Community Crookston with her loving family by her side.

Rosemary was born in Crookston on June 10, 1937, the daughter of William and Eugenie (Charron) Prudhomme. She was baptized and confirmed in the Catholic faith and raised on the family farm in Kertsonville Township with her 2 brothers and 3 sisters. Her education began attending the nearby Polk County School District #184 country school and earning a certificate of graduation from there on July 1, 1951. She would go on to high school at St. Joseph’s Academy in Crookston while boarding with relatives during the week. During these years she also worked for the Sisters of St. Benedict in the dietary department of St. Francis Hospital.  Rosemary graduated from St. Joseph’s Academy on May 27, 1955. Later that year she was united in marriage to the love of her life, Raymond “Ray” Eugene Tate in a ceremony that took place at St. Anne’s Catholic Church on October 15, 1955. Through the coming years they would become the proud parents of their 5 children: Russell, Jean, Mark, William, and Dennis. In 1960 they moved to Gentilly to raise their family. Rosemary began working at Robert’s Restaurant in Crookston in the early 1970’s and was there until 1978 when she became employed at the Villa St. Vincent in the dietary department. Ray was employed with Plant Services at the University of Minnesota-Crookston.

Camping was a favorite pastime of the Tate family and many wonderful memories were made around the campfires at Oak Grove Resort on Maple Lake. While growing up Rosemary’s kids remember what a wonderful baker their Mom was; especially her Christmas baking. Ray’s co-workers at UMC all looked forward to the Christmas goodies she put on trays for him to take to work for them to enjoy. Rosemary and Ray were honored at a reception at the Golden Link when they were named Experienced Americans, a tradition that had been established by the City of Crookston.

With the kids grown and on their own, Rosemary and Ray moved into Crookston in 1996 and then in July of 2004 to Nimens Building C.  Rosie made many long-lasting friendships at Nimens and in the complex became affectionately known as “Rosie 1”, while her good friend and neighbor, Rosie Stuckey, was “Rosie 2”. Sadly, Raymond passed away on June 21, 2007, and not long after that Rosemary retired from the Villa. Rosemary was always ready for a game of cards, dominos, or putting together a puzzle. She enjoyed crocheting, knitting, doing embroidery, and solving word find puzzles. Sharing a cup of coffee with her friends was always something she looked forward to. In past years Rosemary and Ray had enjoyed many casino trips around the area taken with her sister, brother, and their spouses.

Rosemary was a devoted member of St. Peter’s Catholic Church while living at Gentilly and the Cathedral Parish when they moved back to Crookston. She was also a member of the Holy Rosary Circle. She served on the Experienced American and Entertainment Committees of the Golden for several years.

Rosemary loved her family dearly. Throughout her life she never sought the limelight, always preferring to remain in the background. The only time she enjoyed being the center of attention was when she was surrounded by her grandkids and great grandkids. They were truly the light of her life, and the joy and love they all shared when together was really something to behold.

The Memorial Mass of Christian Burial celebrating Rosemary’s life will be held at 11:00 a.m., Saturday, February 19, 2022, in the Cathedral of the Immaculate Conception in Crookston with Father Bob Schreiner, presiding. Visitation with her family will be at the Cathedral on Friday, February 18th from 5-7:00 p.m. with a 7:00p.m. prayer service, and visitation will continue for one hour prior to the Mass on Saturday. Both services will be livestreamed by going to the home page at www.crookstoncathedral.com and clicking on the funerals prompt to view. Inurnment will take place in Oakdale Cemetery, Crookston, in the spring.

The family would like to thank Dr. Fashoro and Shannon Ringstad for all the care you gave our Mother over the years. Thank you to all the employees of RiverView Health and the Benedictine Living Community -Villa for the excellent care you gave her over the last 2 years. A special thank you to Hospice of the Red River Valley for caring for Mom on her final journey.

In lieu of flowers memorials may be given to RiverView Health Foundation, Benedictine Living Community – Villa or Hospice of the Red River Valley. Messages of condolence to the family may be conveyed by going to www.stenshoelhouske.com

To send flowers to the family or plant a tree in memory of Rosemary A. Tate, please visit our floral store.