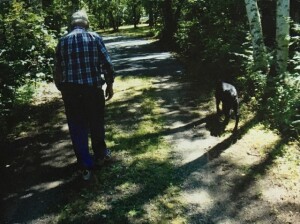 Richard N. “Richie” Johnson, 90, a longtime Crookston resident, passed away at his home early Friday morning, October 30, 2020 under the care of home health care workers, hospice, and with his wife, Betty Ann at his side.

Richard Norby Johnson was born on July 23, 1930 in Bemidji, MN, one of 3 children of the union of Henry “Hank” and Ruth (Norby) Johnson.  He grew up on the family farm near Hines, MN and was baptized and confirmed at the Presbyterian Church in Hines.  He attended Blackduck High School and graduated with the Class of 1948.  On January 6, 1951 Richie enlisted in the US Navy.  He served stateside during the Korean Conflict at Jacksonville, FL and Memphis, TN.  Following the sudden death of his father, Richie received his honorable discharge on November 29, 1951 to return home to run the farm with his mother.  He would later attend the Dunwoody Institute in Minneapolis.  On June 27, 1953 Richie was united in marriage to Betty Ann Tangen at the Fisher Lutheran Church in Fisher, MN.  In the coming years they would be blessed by the births of daughter, Nancy, and son Roderick, who were raised in a very loving home.  Richie and Betty Ann first settled in Blackduck where Richie was employed by the Minnesota Highway Department.  In 1959 they moved to Crookston where Richie had accepted a position as Assistant City Engineer.  Betty Ann taught Business and Physical Education courses at Crookston Central High School for many years until her retirement.

Richie went on to work for Ruffridge-Johnson Equipment Company selling heavy duty construction equipment.  A few years later, he and partners Clark Dahlgren and John “Bud” Schraeder, established Northern Paving and J and S Gravel companies, doing paving construction throughout northwest MN.  Following the sale of the businesses and his retirement, Richie built a cabin in the woods near Lake Beltrami, north of Bemidji, which became a wonderful retreat for the whole family and his deer hunter friends.

Richie loved his family unconditionally and treasured his friendships in life.  He was actively involved in the Crookston community and loved to fish, hunt, golf, play cards, and officiate high school football, basketball, and baseball throughout Northwest MN. Richie was an avid supporter and fan of sporting teams in the Crookston community.  Richie did not just enjoy his hobbies—he loved doing them with friends and family.

Richie’s family would like to extend their gratitude to Cindy Fenno, Winston Johnson, and Corrina Ontiveros and the home health care team who provided loving and compassionate care over the last 3 years.

Due to COVID-19 concerns a memorial service honoring the life of Richard “Richie” Johnson will be held at a later date when his loving family will all be able to come together. A further announcement will be released at that time.  Memorials may be given in Richie’s name to Crookston Parks and Recreation Department for scholarships or Trinity Lutheran Church and sent to Betty Ann Johnson, 120 Golf Terrace Drive, Crookston, MN 56716.

To send flowers to the family or plant a tree in memory of Richard N. "Richie" Johnson, please visit our floral store.