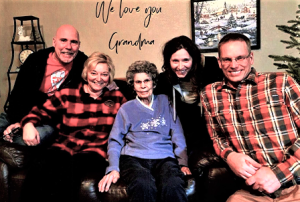 Muriel Ann Nentl, 94, of Fertile, MN, and formerly of Fisher, MN, passed away Friday morning, April 15, 2022, at RiverView Health in Crookston with her daughter and son-in-law, Janis and Steve Williams, at her side.

Muriel was born at New Ulm, MN on June 24, 1927, the daughter of Joseph and Frances (Prokosch) Earl. She grew up with her brother and sister in Sleepy Eye, MN where she was baptized and confirmed at St. Mary’s Catholic Church and educated at St. Mary’s School. After her graduation from St. Mary’s High School in June of 1945 Muriel enrolled at the Viola Johnson School of Beauty Culture in Mankato, MN. Upon completion of her studies in May of 1946 she began working as a salon hair stylist. Muriel was united in marriage to Bernard Anthony Nentl a year later on June 16, 1947 at St. Mary’s Church in Sleepy Eye. The couple made their first home in Mankato where daughter, Jan, was born. The family later moved to New Ulm and Muriel was employed at the 3M Company there. After several years came a move to St. Paul, MN where Muriel managed the shoe department for a local Sears Store. Sadly, Bernard passed away on November 2, 1975. In the mid 1980’s Muriel moved to Fisher to be closer to her daughter, Jan, and family. In March of 2017 she became a resident of the Summerfield Apartment in Fertile. Throughout her life she enjoyed doing crossword and jigsaw puzzles and had been in the midst of putting together a complicated puzzle at the time of her passing. In past years Muriel loved being outdoors, working in her yard and tending her beautiful flower gardens. She had been a member of the St. Francis Catholic Church in Fisher for several years.

Muriel is survived by her beloved daughter, Jan Williams and her husband, Steve, of Maple Lake, near Mentor, MN; 2 granddaughters, Heather and husband, Jim Williams, of Winona, MN and Melissa and husband, Jeremy Klein, of Lakeville, MN; and sister-in-law, Jean Earl of Waseca, MN; as well as, several nieces and nephews, extended family, and friends. In addition to Bernard, her husband of 28 years, Muriel was preceded in death by her parents, Joseph and Frances Earl; brother, Ralph Earl; sister, Alice Mattson, and several sisters-in-law and brothers-in-law. Blessed be the memory of Muriel Ann Nentl.

Mass of Christian Burial for Muriel Nentl will be celebrated at 10:30 am, Saturday, April  30, 2022, at the St. Francis Catholic Church in Fisher, MN with The Rev. Joshy Mathew, presiding. Visitation will be for one hour prior to the service which will be livestreamed by going to Muriel’s obituary page at www.stenshoelhouske.com and clicking on the prompt to view. Interment will take place in Greenwood Cemetery, Fisher, later this spring.

Messages of condolence may be offered to Jan and Steve at www.stenshoelhouske.com

To send flowers to the family or plant a tree in memory of Muriel Ann Nentl, please visit our floral store.