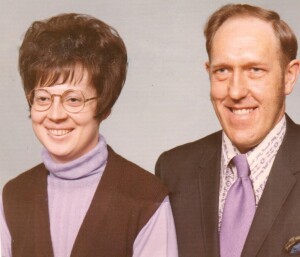 Merle Norman Rafteseth, 91, of Crookston, MN, passed away early Friday morning, April 23, 2021, in the Benedictine Living Community-Crookston with his beloved wife, Ruth, at his side.

Merle was born in Thief River Falls, MN on March 11, 1930, one of four children of the union of Hjalmer and Nellie (Wiseth) Rafteseth. He first lived in Rosewood, MN as a child. Following the death of his mother when Merle was just 6 years old, he was raised in various foster homes, the last of which was in St. Hilaire, MN where he attended school. He then reunited with his family and completed his last 2 years of high school in Thief River Falls, graduating in 1948. Merle next went to work for the Minnesota Highway Department. On December 14, 1951 he enlisted in the US Marine Corps, serving during the Korean Conflict as a radar equipment foreman. He was awarded the National Defense Service Medal and received his honorable discharge on December 4, 1953. After returning home Merle worked several different jobs, including at the St. Hilaire Creamery and Jiffy Fry in Crookston.  He furthered his education by attending Northland State Junior College in Thief River Falls and Bemidji (MN) State College where he earned a Bachelor’s degree in Social Studies with a minor in Mathematics in 1971. On July 22, 1972 Merle was united in marriage to the love of his life, Ruth Marie Mersy, at St. Joseph’s Catholic Church in Red Lake Falls, MN. The couple made their home in Red Lake Falls while Merle worked as a supervisor for the Occupational Development Center (ODC) in Crookston. In 1975 they moved to Crookston where Merle had accepted a position as operating engineer for Plant Services at the University of Minnesota-Crookston (UMC). He was tasked with ensuring that the campuses many buildings were heating at maximum efficiency. Under his watch they always were, and he was commended by the Teamsters Local 320 for his many efforts. Merle retired from the University in 1992.  After his retirement from UMC, Merle worked at the Sisters of St. Joseph Provincial House, and also volunteered for the Tri-Valley Opportunity Council Senior Companion Program.  He was recognized with an award for his many years as a volunteer for them.

Merle was a devoted member of the Cathedral of the Immaculate Conception, where he joyfully sang hymns from his pew and served as a eucharistic minister for many years. He served on the Board of Directors of the Development Achievement Center (DAC) from 1976-85 and was also a member of American Legion Post #20.

Merle enjoyed listening to country music, going out to eat, and visiting with friends over a cup of coffee.  He also enjoyed travelling with his family and amassed quite a collection of hats and caps from all the places he visited over the years. Merle was a hard worker all his life. Whenever someone needed help with repairs around their home he was right there to lend a hand, and very happy to do so. Merle was a wonderful husband to Ruth, father to Kari and Karl, and grandfather to Katelyn and Martin. He will be very lovingly remembered and sadly missed by all who shared in his life.

Merle leaves Ruth, his beloved wife of 48 years; their 2 children, Kari Boese and her husband, Daniel, of Grand Forks, ND, and Karl Rafteseth of Crookston, MN; 2 grandchildren, Katelyn and Martin Boese of Grand Forks; brother, Duane Rafteseth of Hawley, MN; sister, Delores Harder of DeLand, FL; other family members; and many friends. He was preceded in death by his parents, Hjalmer and Nellie Rafteseth; brother and sister-in-law, Kenneth and Darlene Rafteseth; sister-in-law, Maxine Rafteseth; brother-in-law, Otto Harder; and parents-in-law, Herbert and Grace Mersy.

The Mass of Christian Burial for Merle Rafteseth will be held at 1:00 p.m., Thursday, April 29, 2021, in the Cathedral of the Immaculate Conception in Crookston with The Very Rev. Vincent Miller, presiding. Visitation will be for one hour prior to the funeral. Military Honors will be provided by the United States Marine Corps Honors Team and the Crookston Veterans Council. The Mass will be livestreamed and can be viewed by logging on to www.crookstoncathedral.com shortly before the Mass and clicking on the prompt for Funerals/Burials. A graveside service for Merle will held at St. Charles Catholic Cemetery, Trail, MN, at 3:30 p.m. that afternoon.

Online registry and messages of condolence may made at www.stenshoelhouske.com

To send flowers to the family or plant a tree in memory of Merle Norman Rafteseth, please visit our floral store.