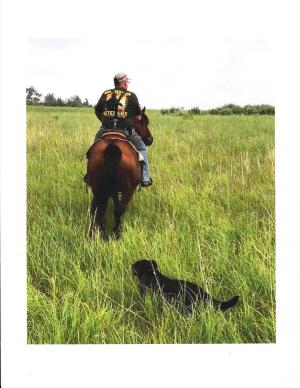 Linus Joseph Gabriel Desrosier, 74, of rural Gentilly, MN, passed away at his home late Tuesday afternoon, April 20, 2021, with his beloved wife, Cathy, and many family members at his side. He had been receiving care from Hospice of the Red River Valley while bravely battling cancer.

Linus was born in Crookston, MN on November 20, 1946, one of twelve children of Alfred and Doris (Perreault) Desrosier. He was baptized and confirmed in the Catholic faith and grew up on the family farm near Beltrami, MN. When he was 14 years old the family moved to Crookston where he attended Crookston Public Schools. Linus enlisted in the US Army on December 29, 1964 and was stationed in Germany, training Soldiers to operate tanks during his tour of duty. On December 7, 1967 he returned to Crookston following his honorable discharge. For his patriotic service to his country Linus was awarded the National Defense Service Medal and the Marksman (Rifle) Badge. He was united in marriage to Catherine Madonna Walsh on May 29, 1971 in the Cathedral of the Immaculate Conception. The couple made their home in Crookston where they lovingly raised their 5 children: Robbie, Tracy, Kal, Aaron, and Trevor. Linus joined the ND National Guard in 1972 and served with the 1-188th Air Defense Artillery headquartered in Grand Forks, ND. Through the years he was employed with several Crookston businesses including Heldstab’s Tire, Kelly Oil Company, and Crookston Cold Storage. Linus later drove a truck for J Farms at Halma, MN, and Senske and Son Trucking in Grand Forks, and then served as boiler operator for the Sisters of St. Joseph at the Provincial House. Eventually Linus retired, but not really, as he continued driving truck for area farmers until recently when his fight against cancer made it too difficult to climb into the cab.

Linus was very proud of serving his country in the military. In 1989 Linus and his unit were deployed to Panama for Operation Just Cause to bring General Noriega to justice. During the record snowfall of 1996-97 he operated a D7 Caterpillar pushing snow during the National Guard’s Operation Snowball. When the Red River overflowed its banks during that spring’s record flood he maneuvered a military flatbed ferrying Grand Forks Fire Fighters and their trucks through the deep waters to the site of a major fire in the City’s downtown area. Then in 2003 as a soldier with the 141st Engineers, 58 year old Linus was deployed to Iraq. He returned to Crookston a year later and finished out his National Guard career, retiring as a Sargent 1st Class in 2006, capping 37 years of service to his country.

Linus was a member of the Cathedral Parish in Crookston. After he and Cathy moved to rural Gentilly in 2005 he then became a member of St. Peter’s Catholic Church and also held longtime memberships with the Knights of Columbus, Crookston Police Reserve, Polk County Posse, and served on the Gentilly Township Board as a supervisor. He was an avid gun collector and lifelong hunter. Linus was a very loving husband, father, “papa” (grandpa and great-grandpa), son, brother, and uncle. He and Cathy loved spending time with the kids and their families and really enjoyed spending time with his youngest grandchildren and great-grandchildren. He enjoyed woodworking in his shop, building everything from cabinets to beds and remodeling their house that never seemed to get finished, and playing cards with friends.

The Mass of Christian Burial for Linus Desrosier will be held at 11:30 a.m., Saturday, April 24, 2021, in St. Peter’s Catholic Church in Gentilly, MN, with The Very Rev. Vincent Miller, presiding, and Deacon Dennis Bivens, homilist. Visitation with the family will be for one hour prior to the funeral. The wearing of masks will be required. Interment with will follow in St. Peter’s Cemetery with Military Honors provided by the Crookston Veterans Council and the Minnesota National Guard Honors Team from Moorhead.

Online registry and messages of condolence may be given at www.stenshoelhouske.com

To send flowers to the family or plant a tree in memory of Linus Desrosier, please visit our floral store.