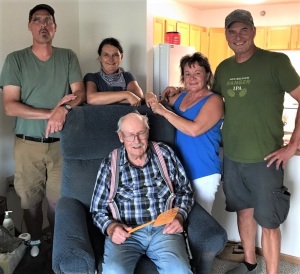 Linda Marie Isaacson, 60, of Crookston, MN, passed away unexpectedly at her home Sunday, March 27, 2022, after a brief battle with cancer.

Linda was born at Warren, MN on February 26, 1962, the daughter of Leonard and Karen (Nowacki) Lubarski. She was baptized and received the sacrament of communion in the Catholic faith at St. Peter and Paul Catholic Church in Warren. As a young girl she moved with her family to the Tower-Sudan area of the Minnesota Iron Range. A few years later they returned to Warren where Linda graduated from Warren High School in 1981.

On July 16, 1984, she was united in marriage to Dean Alan Isaacson in Reno, NV. The couple settled on their farm, near Crookston, to raise their children: Jason, Josh, Cassidy, and Justin in a very loving home. They later moved into Crookston where they owned and operated the Forest Knolls Trailer Court for several years. In 2004 Linda began working for the American Crystal Sugar Company and had remained there to the present time.

She enjoyed fishing, snowmobiling, collecting stamps and coins, and feeding the birds. Her greatest passion would always be for her precious grandchildren. Linda looked forward to retirement and spending summers making memories with them at their cabin on Lake of the Woods. She and Dean had spent the last few winters vacationing in Fort Mohave, AZ, near Bullhead City, where they purchased property that would become their future winter home. Her loyal pup “Pepper” was always underfoot, and while almost tripping her at times, he wanted to make sure that his “Mom” was never far away.

Linda is preceded in death by an infant grandson, Jason; her father and stepmother, Leonard and Shirley Lubarski; sister, Tammy Lubarksi; parents-in-law, Carl and Eleanor Isaacson; and brother-in-law, John Scheerer.

The Mass of the Christian Burial for Linda will be celebrated at 1:30 p.m., Monday April 4, 2022, at the Cathedral of the Immaculate Conception in Crookston with The Rev. Joe Richards, presiding. Visitation will be for one hour prior to the Mass. The service will be livestreamed by logging on to www.crookstoncathedral.com and clicking on the Funerals prompt to view. Interment will take place at Hafslo Cemetery, rural Crookston, later in the spring.

Messages of condolence may be given to Dean and family at www.stenshoelhouske.com

To send flowers to the family or plant a tree in memory of Linda Marie Isaacson, please visit our floral store.