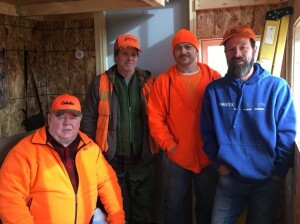 James “Jim” Earl Gustafson, 78, of Crookston, MN, passed away Wednesday evening, May 4, 2022, at the Altru Hospital in Grand Forks, ND with his loving family at his side.

Jim was born in Crookston on November 14, 1943, the second of 3 children of the union of Earl R. and Mildred L. (Larson) Gustafson. He was raised on the family’s farm at Melvin Station, near Crookston, and baptized and confirmed at Concordia Lutheran Church in Fertile, MN. Jim attended Fertile public school and graduated from Fertile High School with the Class of 1961. While in school he was employed by the Spring Gravel Company near Melvin Station. Jim enlisted in the US Army on January 4, 1962 and reported to Fort Carson, CO for basic training. Upon completion he went to the Aberdeen Proving Ground arsenal in Hartford County, Maryland where he was schooled as a machinist. While home on leave Jim was united in marriage to Judy Marie Forseth at St. Paul’s Lutheran Church on October 6, 1962. Jim was next assigned to duty at Fort Benning, GA and Judy was able to join him there. Six months later Jim was sent overseas to Zweibrüzken, Germany and Judy returned to their home in Crookston. Eighteen months later he returned to the United States to Fort Hamilton, NY and received his honorable discharge from the Army on December 31, 1964. For his service to his country Jim was awarded the M-14 Sharpshooter Badge and the Good Conduct Medal. Jim rejoined Judy and in the coming years their marriage would be blessed by the births of Mark, Lisa, and Brian.

In 1965 Jim began working for the Espe Machine Company as a machinist. Two years later he accepted a position as machinist with the American Crystal Sugar Company and after several years was appointed to a management position in the company as Maintenance Superintendent. Following 32 years of dedicated service to Crystal Jim took his well-earned retirement in 1999. Life was good as he and Judy enjoyed spending time at their cabin on Union Lake; taking RV trips throughout the western and southern United States; and going on cruises to the Caribbean and Alaska. Jim looked forward to hunting trips, fishing, and playing cards with his family and friends. He had been a faithful member of St. Paul’s Lutheran Church in Crookston, volunteering in various ways since he and Judy were first married. Additionally, Jim was a lifetime and charter member of the Crookston Gun Club, and held memberships in the NRA, Elks Lodge, Eagles Aerie 873, and American Legion Post 20.

Jim was loving, generous and caring, detail oriented, and a man of his word. His wife and family were his pride and joy, especially his grandchildren; he will be greatly missed.

Jim is survived by Judy, his beloved wife of 59 years; their 3 children: Mark Gustafson of Crookston, MN, Lisa Brace and husband, Don, of Champlin, MN, and Brian Gustafson of Fertile, MN; 4 grandchildren: Derrick Gustafson of Dilworth, MN, Breanna Gustafson of Newfolden, MN, Augusta Brace of Champlin, and Donald “DJ” (Claire) Brace serving with the US Marine Corps in NC; sister, Janet Opdahl of Keizer, OR; sister-in-law, Pat Gustafson of Beltrami, MN; nephew, Lance (Kelly) Opdahl of North Plains, OR; and 4 nieces: Sheri Gustafson and Lori Gustafson of Fargo, ND, Teri Gustafson of Beltrami, and Mari (Paul) Osborne and daughter, Raeann, of Bemidji, MN; together with many cousins and friends. From Judy’s side of the family he leaves her sister, Arlene Mills of Maple Grove, MN; brother, Craig (Caryl) Forseth of Sun City West, AZ; and nieces and nephews: Angie Mills of Hopkins, MN, Corey (Betsy) Mills and children, Lillian and Jonathan, of Brooklyn Center, MN, and Christian (Tracy) Forseth and children, Everett and Ingrid, of Crookston. Jim was preceded in death by his parents, Earl and Mildred Gustafson; brother, Charles Gustafson; parents-in-law, Arley and Alice Forseth; and brother-in-law, Darryl Forseth. May God richly bless the memory of James Earl Gustafson.

The funeral service celebrating the life of Jim Gustafson will be held at 2:30 pm, Sunday, May 15, 2022, at St. Paul’s Lutheran Church in Crookston with Pastor Jeff Brown, officiating. Visitation will be at the church from 1:30 to 2:30pm. The funeral will be livestreamed by going to Jim’s obituary page at www.stenshoelhouske.com and clicking on the prompt to view. Burial will take place at 5:30pm that afternoon at the Concordia Cemetery in Fertile, MN with Military Honors provided by the Crookston Veterans Council and the MN National Guard Funeral Honors Team. In lieu of flowers please consider a gift in Jim’s name to St. Paul’s Lutheran Church or a charity of choice.

Online messages of condolence to Judy and family may be conveyed at www.stenshoelhouske.com

To send flowers to the family or plant a tree in memory of James "Jim" Earl Gustafson, please visit our floral store.