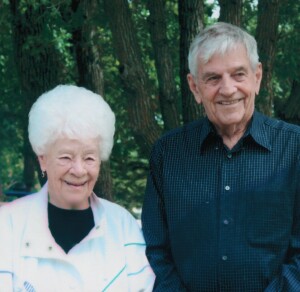 Deloris Arlone Stauning, 96, of Fertile, MN and formerly of Beltrami, MN, passed away peacefully in the Fair Meadow Nursing Home, Saturday, September 18, 2021, with members of her family at her side.

Deloris was born on February 12, 1925 in her parents’ farm home near Buxton, ND, in Bingham township of Traill County, the daughter of Palmer and Mae (Gordon) Monson. She was baptized on April 25, 1925 in Caledonia, ND, confirmed at the Salem Lutheran Church, and educated at a nearby country school and Climax (MN) High School. In later life she shared fond memories such as growing up during the Great Depression (“I didn’t know how poor we were”), riding the train to Fargo, and watching her brother Walter’s flight from the barn loft using wooden wings. She also recalled skiing down the slope of a shed onto a snowbank on wooden skis made by her father, and a wild ride taken by her brothers in the Model T, when they were so young it took two to operate all the controls. As a young woman she later moved to Nielsville, MN where she worked in the Nielsville Café for a time.

Deloris was united in marriage to her first love, Maurice Mjelde, on October 20, 1944 in Nielsville. They lived and farmed in Scandia township, near Beltrami. Maurice died on August 27, 1964. Deloris would later marry her second love, Fred Stauning, in Bloomington, MN on October 28, 1966. They lived on the farmstead in Scandia township until moving into Beltrami in 1975. Deloris was employed in the Co-Op Store of the Beltrami Mall for several years and also served on the Co-Op Store Board of Directors. She was the first woman ever elected to the office of Beltrami City Clerk. Deloris was a former president of the Fertile-Beltrami PTA and a 4-H club leader, teaching young girls the art of sewing. For many years she provided seamstress work for friends and neighbors in the Beltrami area and volunteered countless hours to the Polk County Historical Society. She also held longtime membership in the Beltrami American Legion Auxiliary. Deloris was a devoted member of the Scandia Lutheran Church where she taught Sunday school and served on the worship committee. She was just as active in the Trinity Lutheran Church after moving into Beltrami. Deloris enjoyed being a mother almost always, although there may have been a few testy moments from time to time. She loved pets and strays, lavishing her affection on them, and small children were a joy to her. After Fred’s passing on November 28, 1996 Deloris continued living in Beltrami until moving to Fair Meadow Assisted Living Fertile in 2015. In 2019 she became a resident of Fair Meadow.

The funeral service for Deloris Stauning will be held at 2:00 p.m., Saturday, September 25, 2021, in the Trinity Lutheran Church in Beltrami, MN with The Rev. Phil Larsen, officiating. Visitation with the family will be for one hour prior to the service. The funeral will be livestreamed by logging on to www.stenshoelhouske.com 10 minutes before the scheduled start and going to the bottom of Deloris’ obituary page to click on the prompt to view. Burial will follow in the Scandia Cemetery, rural Beltrami, MN. Due to COVID 19 concerns the family requests that masks be worn by all who will be attending the funeral service.

Online registry and messages may be made at www.stenshoelhouske.com

To send flowers to the family or plant a tree in memory of Deloris Arlone Stauning, please visit our floral store.