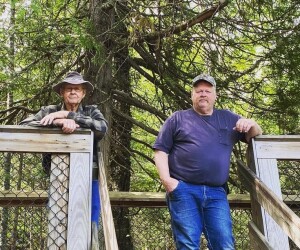 Craig was born on December 6, 1961 in St. Louis Park, MN, one of three children of the union of Marvin and Verla (Carlson) Reierson. In 1968 he moved with his family to Milaca, MN where he was raised on a dairy farm. Craig graduated from Milaca High School as a member of the Class of 1980. He furthered his education studying Diesel Mechanics before enrolling at the Minnesota State Community and Technical College in Brainerd, MN where he also played football for the Spartans. Craig remained in the area and purchased a tri-plex in Nisswa where he lived and managed the property. Craig later moved to Ely, MN, attending Vermilion Community College and earning an Associate degree in Law Enforcement. In 1985 he partnered with his parents as they purchased the Spider Web Resort and Supper Club on Spider Lake near Nevis. After selling the business a few years later he moved to the Twin Cities where he was a self-employed floor covering installer for 10 years. He married Holly Antolak in 1995 at Lord of Life Church in Ramsey, MN. Craig moved to Crookston in 2015 where he continued his floor-covering business to the present time.

Craig was an avid outdoorsman. He loved to fish, hunt, and spend countless hours at his deer land. Much of his outdoor time was spent with his stepson, Zach, who also shared the same passions for the great outdoors. Craig was a hard worker and very meticulous about every job he did. He was a wonderful stepfather, loving brother, uncle, son, and great friend to all who knew him. The memories we made and hold in our hearts will serve as a reminder for how blessed we were to have Craig in our lives.

A memorial service for Craig and his father, Marvin, will be held at 2:00 p.m., Friday, February 4, 2022, in the Stenshoel-Houske Funeral Home with visitation for one hour before the service. The funeral will be livestreamed by going to Craig’s obituary page at www.stenshoelhouske.com and clicking on the prompt to view.

Online registration and messages of condolence may be made at www.stenshoelhouskje.com

To send flowers to the family or plant a tree in memory of Craig Marvin Reierson, please visit our floral store.

Your browser does not support this video format. You should be able to view it in Chrome, Safari or Internet Explorer.