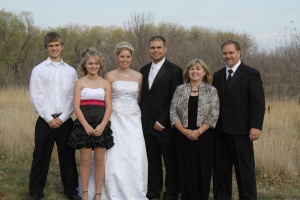 Charles Blane “Chuck” Goering, 60, of Mentor, MN, passed away Wednesday afternoon, November 3, 2021, at the Brigham and Women’s Hospital in Boston, MA, with family at his side. Chuck had been in failing health for several weeks.

Chuck was born in St. Cloud, MN, on November 21, 1960, the 4th of 9 children of the union of David and Shirley (Felling) Goering. His early years were spent in Cold Spring, MN, until the family moved to Crookston. His education began in Crookston where he attended elementary school, middle school, and Central High School. While in school, Chuck developed a love for cooking as he worked in the kitchens of Your Host, Minakwa Country Club, and the Northland. In 1979, he began employment with the Burlington Northern Railroad. He met the love of his life, Kim Marie Kaste, of Fertile, MN, on January 1, 1982.  Chuck and Kim were united in marriage on October 1, 1983, at the Cathedral of the Immaculate Conception in Crookston. In the coming years their marriage would be blessed by the births of Blaine, Cooper, and Ciara. In 1985, Chuck began working for DEE Inc. until 1997, when he and Kim purchased Harvey’s Market, which they owned and operated for 2 years. In 1999, Chuck began his career as a corrections officer for the Tri-County Correctional Center. In 2018, he was promoted to Sargeant, holding that position to the present time. Earlier this year, he was honored with a “Life Saver” award for saving the life of an inmate at Tri-County Community Corrections.

Chuck and Kim were longtime members of the Cathedral of the Immaculate Conception in Crookston.  In December of 2016, the couple moved to a home on Maple Lake near Mentor, MN, where they enjoyed the relaxing pace of lake life with their family and friends.

Chuck always kept busy with something or other.  He loved fishing with his family and spending time with his grandchildren on the pontoon.  He had a passion for hunting, especially bow hunting, and one of his favorite places in the world was up in a tree stand.  One of his absolute favorite things, however, was spending time with his grandchildren, Joseph and Ashlyn.  They looked up to “Grandpa Chuck”, and he was never happier than when spending time with those two.  Chuck would routinely donate blood, and was a volunteer for the Toys for Tots program for several years.  Chuck had a heart of gold and was always willing to help someone in need.

In addition to Kim, his beloved wife and best friend for 38 years, Chuck is survived by their 3 children and daughter-in-law: Blaine and Lindsey Goering of Crookston, MN, Cooper Goering of Mentor, MN, and Ciara Goering of Crookston, MN; 2 beloved grandchildren who will miss ‘Grandpa Chuck’ dearly, Joseph and Ashlyn; 8 siblings and their spouses: Brenda and Al Hagemeier of Fargo, ND, Roberta “Bobbie” and Roger Valley of Red Lake Falls, MN, David and Kelly Goering of Plymouth, MN, Don and Theresa Goering and Craig and Kristy Goering of Grand Forks, ND, Duane and Alice Goering of Peyton, CO, Edward and Doris Goering of Colorado Springs, CO, and Tracy and Jeff Musolf of Shawnee, KS. From Kim’s side of the family he leaves his mother-in-law, Myra Kaste of Fertile, MN; his siblings-in-law and spouses: Keith and Diane Kaste of Ada, MN, Kenneth Kaste, Kay Rohrer, and Kelvin Kaste (Michele Anderson), all of Fertile; as well as, many nieces, nephews, other relatives, and friends.

Chuck was preceded in death by his parents, David and Shirley Goering; father-in-law, I. Kenneth Kaste; and niece and God-daughter, Morgan Kaste.  Chuck will be very lovingly remembered and sadly missed by all who were part of his life.

A Memorial Mass of Christian Burial will be held in celebration of Chuck’s life at 2 pm on Tuesday, November 16,  2021, in the Cathedral of the Immaculate Conception in Crookston with The Rev. Joe Richards, presiding. Visitation will be from 1 – 2 pm.  The family respectfully requests that masks be worn by all in attendance.  The Mass will be livestreamed by going to www.crookstoncathedral.com 10 minutes before the scheduled start and clicking on the prompt to view. Inurnment will take place at a later time.

The Stenshoel-Houske Funeral Home is assisting the family with funeral arrangements. Online registration and messages of condolence may be made at www.stenshoelhouske.com

To send flowers to the family or plant a tree in memory of Charles Blane "Chuck" Goering, please visit our floral store.