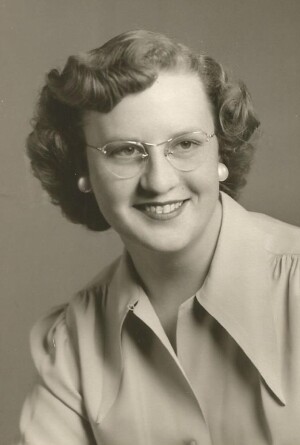 Camilla Thompson, 88, of Fertile, MN, passed away at her home Sunday morning, June 21, 2020, comforted by having her family at her side.

Camilla was born on February 5, 1932, to her father and mother, Gustavis A. and Helene (nee Jensen) Olsen, at Texhoma, OK--on the northside of the Texas panhandle.  She graduated from Gruver High School in 1949, Gruver, TX, and moved to Amarillo, TX.

Camilla met Herman Melbourne Thompson, while he was in the military, and on February 21, 1953, they married at Clovis, NM.  After Herman's discharge, they moved to Maple Bay, MN, and, later to Fargo, ND, where they raised their family. Through the years Camilla had multiple different part time jobs but her real life work was raising their three children.

In 1990, when Herman retired, they bought and, over the years, renovated a house to meet their needs in Fertile, MN.  Seeing Camilla and Herman work together was always a blessing.  They demonstrated through their actions what it means to be married.  Camilla and Herman's love for one another was evident to all who knew them.

"Grandma was never one to be in the spotlight but was happy to be in the background serving and taking care of others. She was the supporting role of Herman in all their adventures. She was always ready with candy and a hug. When Herman sang, Camilla would accompany him on the piano. She loved the time spent with grandchildren, and in later years, her great-grandchildren also brought her great joy."

Teaching her children and grandchildren necessary life skills was a joy for her as they learned to cook, sew, quilt, care for flower gardens, and yard work.  When needed, Camilla would drop what she was doing to care for her family.

The funeral service for Camilla will be held at 1:00 pm, Thursday, June 25, 2020, at the Stenshoel-Houske Funeral Home in Crookston with Pastor Dale Finstrom, officiating and assisted by Anders Macy. Visitation will be for one hour before the funeral. Interment will follow at the Maple Bay Free Lutheran Church Cemetery, rural Fertile, MN.

To send flowers to the family or plant a tree in memory of Camilla Thompson, please visit our floral store.