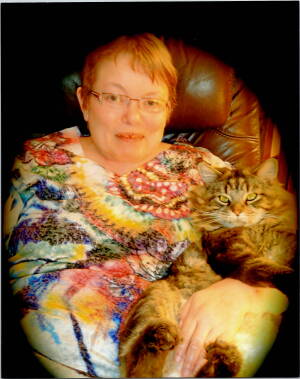 Arlene Margaret Moen, 71, of Fargo, ND, passed away Tuesday morning August 2, 2022. Arlene was born in Crookston, MN, on April 15, 1951. She was the oldest child born to the union of Norman and Margaret (Andersen) Moen. Growing up she was baptized by Pastor Larsen and confirmed by Pastor Tellefson at Trinity Lutheran Church. After graduation from Central High School with the class of 1969, Arlene attended Northwestern School of Nursing in Minneapolis. She received her degree as a Registered Nurse in 1972, and began her career at St. Ansgar Hospital in Moorhead, MN. In 1975, she moved to Burnsville, MN, and began work at Methodist Hospital in St. Louis Park. Two years later, Arlene accepted a position at Abbott Northwestern Hospital in Minneapolis. In 2007, with her health in decline she reluctantly retired after a rewarding 35 year career in nursing.

Aside from her nursing career, Arlene was a passionate pet owner. She discovered a love for Maine Coon cats, and was a member of the state and national level Cat Breeders Association. Arlene developed an impressive reputation as a Maine Coon breeder. Her cats were photographed and appeared on products for the national retailer Target Corporation. Arlene competed with her pedigreed cats throughout the nation, and developed many great friendships through this community.

Arlene loved cooking and baking, she always had a new recipe or cookbook to share. She was the ultimate host to family and friends as she graciously entertained them. All who came to her home were warmly greeted and genuinely welcomed. Like many Norwegians, Arlene had an appreciation for good coffee. She would always offer a cup of coffee and often brew a delicious cappuccino for visitors. In 2016, Arlene moved to Fargo and became a resident of Bethany Retirement living. This made it possible for her to be closer to her sisters and brother whom she so dearly loved.

Arlene is survived by her three siblings: Jim (Connie) Moen of East Grand Forks, MN, Silvia (Guy) Martin of Crookston, MN, and Cleo (Jon) Swanson of Fargo, ND; nieces and nephews: Heather Moen of East Grand Forks, MN, Andrea (Chris) Martin-Wilke of Wayzata, MN, Birgetta (Jacob) Faugstad of Fisher, MN, Hallie (Henry) Fischer of Crookston, MN, Bjorn Swanson and Ingrid Swanson of Fargo, ND; a grand-nephew, Leif Wilke, and grand-nieces Marta Faugstad and Margot Fischer; as well as extended family and many lifelong friends. Arlene was preceded in death by her parents, Norman and Margaret Moen. Arlene will be fondly remembered and sadly missed by all who were a part of her life.

A Memorial Service celebrating Arlene’s life will be held at 7:00pm, Thursday, August 18, 2022, at the Stenshoel-Houske Funeral Home in Crookston with Bill Humiston, Spiritual Care Coordinator of Benedictine Living Communty Crookston, officiating. Visitation with the family will be for one hour prior to the service. Livestreaming will be available by going to Arlene’s page at www.stenshoelhousjke.com and clicking on the prompt to view.

To send flowers to the family or plant a tree in memory of Arlene Margaret Moen, please visit our floral store.

A Memorial Tree was planted for Arlene