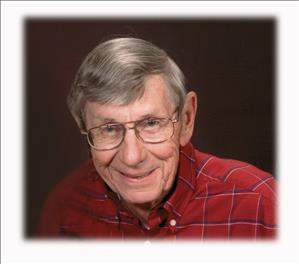 William "Duke" Youngquist, age 87, of Crookston, MN passed away Friday, January 15, 2016 at Altru Hospital in Grand Forks, ND surrounded by his loving family. Memorial services will be held at 11 a.m. Saturday, January 23, 2016 in the Trinity Lutheran Church, Crookston, MN. Bill Youngquist was born June 20, 1928 in Crookston, MN the son of Lawrence and Alice (Sylvester) Youngquist. He graduated from the Crookston Central High School in 1947. Bill married Shirley Thompson in 1950. Duke enlisted in the United States Marine Corp in December of 1950 serving in the Korean War. He carried out the Armistice Papers from the war and was honorably discharged in December of 1953. Duke attended UND beginning in 1954 where he graduated with a Masters' Degree in Industrial Technologies then taught in California, Northern Minnesota then began teaching for the public school system in Grand Forks, ND in 1961. Bill retired from teaching in 1990 then worked as a crop adjustor in his semi-retirement. Shirley passed away in 2002. Bill later married JoAnn (Rice) Bakken-Elleson November of 2008 and the couple made their home in Crookston, MN. Bill loved working with wood, tinkering and was a member of Trinity Lutheran Church, the local VFW and American Legion.

He is survived by his wife, JoAnn Youngquist of Crookston, MN; sons, Tim (special friend, Stacey) Youngquist of Grand Forks, ND and Tom (Bev) Youngquist of St. Petersburg, FL; step-children, Dennis (Elaine) Bakken of Seligma, Missouri, Mark (Judy) Bakken of Appleton, WI, Ronald (Eileen) Bakken of Moorhead, MN and John (Bridget) Bakken of Appleton, WI; 34 grandchildren; 41 great-grandchildren and his brother, Don Youngquist of Crookston, MN. Bill always considered JoAnn's step-children a part of his family and there is a number of the Elleson family who also survive as well as Dave, Leddy and Sara Hernandez who have always been special to him. Duke was preceded in death by his parents; his first wife, Shirley;a son, Todd; and his sister, Darlene Brule. To order memorial trees or send flowers to the family in memory of William Youngquist, please visit our flower store.