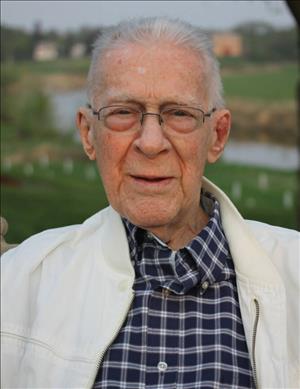 Bill was born on May 8, 1926 in Perham, MN to Arthur and Edna (McGrann) Persson. He graduated from high school in 1944 from Aberdeen, SD. In March of that same year Bill enlisted in the A.A.F. and served in the South Pacific with the Army Air Corp as a navigation/radio operator on a cargo transport plane. He was honorable discharged in November 1946 at the rank of Sergeant. After WWII Bill attended NDSU.

On August 25, 1951 Bill married the love of his life, Marjorie Marie Moran, in Red Lake Falls, MN. They had six children, Preston, Bill, Tim, Tamera, Tom, and Jerry. They lived in Fargo, ND for a number of years before moving to Red Lake Falls, MN. They then moved to Grafton, ND, which was where most of the children graduated from. In later years, they moved to Bismarck, ND, where Bill retired. After retirement they moved to West McDonald Lake in Minnesota and wintered in Alamo, TX. Before retirement, Bill worked as a territory sales manager for Occidental Petroleum and Twin City Roofing.

Bill enjoyed golfing and swimming and spending time with family at his lake home at West McDonald Lake in Minnesota. He and Marge also enjoyed being "Winter Texans" at their second home in Alamo, TX. Bill was known for his quick wit and charm.

He is preceded in death by his wife, Marjorie; sister, Laverne Fleming; grandson, Preston (PJ); and granddaughter, Brooklyn.

There will be a Funeral Mass at 10:30 a.m. with a visitation starting at 9:00 a.m. on Saturday, April 22, 2017 at the Cathedral of the Immaculate Conception in Crookston, MN. Inurnment will be at St. Joseph's St. Mary's Catholic Cemetery in Red Lake Falls, MN.

To order memorial trees or send flowers to the family in memory of William Persson, please visit our flower store.