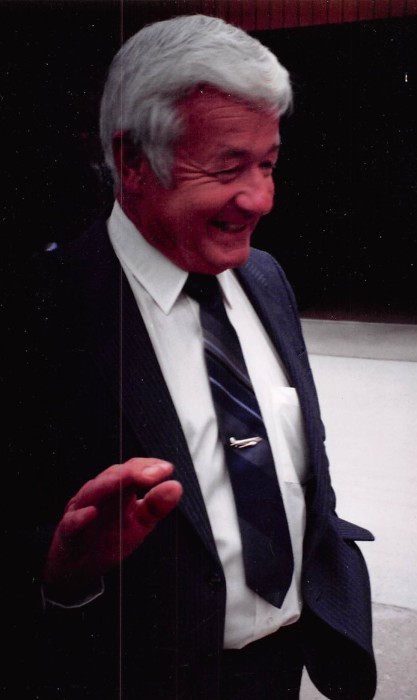 William “Bill” Day Knox, age 88, of Mentor, MN died Saturday, December 8th, 2018 peacefully at home surrounded by his family. A Memorial Mass celebrating Bill’s life will be held Wednesday, December 12th at 11:00 a.m. at St Joseph’s Catholic Church, in Fertile, MN. A visitation will be held at Stenshoel-Houske Funeral Home, Tuesday, December 11th from 5:00 to 7:00 p.m. with a prayer service at 7:00 p.m. Visitation will continue for one hour prior to the service at the church.  Arrangements are with Stenshoel-Houske Funeral Home, Crookston, MN.

William Day Knox was born to Willian C. and Mary Ann (Votova) Knox on August 17, 1930 in Clarendon, Virginia. The family moved to Minnesota in 1931.  Bill attended grade school and high school in Crookston graduating in 1948.  Upon graduation, Bill began training for a career as a pilot. During this time, Bill met and eventually married Mary Elizabeth (Liz) Langenberg on February 11th, 1952 in St. Joseph Pro Cathedral, Winona, MN. Bill entered the Army in 1952 and served at Ft. Leonardwood, Missouri through 1954 as a flight instructor.  He worked in different places prior to settling in the Red River Valley. Bill began his professional flying career in Chicago working for Slick Airfreight at Chicago O’Hare Int. Airport from 1955 to 1959.  In 1959 the family moved to the Twin Cities, Minnesota and Bill was hired by Franklin Manufacturing as their chief pilot.  In 1966 they moved back to the Red River Valley where Bill was the Administrator of the Crookston Airport, and at the same time he farmed. He also resumed his aerial spraying business which he operated out of the Crookston airport. Eventually Bill and Liz built the farmstead near Fisher, MN where they farmed and continued the spraying business until they retired to their "house on the hill" on the shores of Cable Lake near Mentor, Minnesota.

Bill was born with an adventurous spirit. He had many great passions besides flying and farming. Bill and Liz spent 3 years sailing the Atlantic Ocean during the winter months and the Lake of the Woods on summer weekends. He loved woodworking and created numerous precious keepsakes for friends and family. Even after retiring, Bill never quit farming which was evident by the size of his vegetable garden. He kept the whole family in fresh produce.

Bill was a member of St. Joseph’s Catholic Church in Fertile, the American Legion, and was a lifetime member of the NRA. Bill will always be remembered for his teasing sense of humor.  He also loved spending time with his family and friends.

Bill was preceded in death by his parents, one son, Robert; one sister, Jane Stainbrook, and one brother, James.ll continue for one hour prior to the service at the church.  Arrangements are with Stenshoel-Houske Funeral Home, Crookston, MN.

In lieu of flowers, the familly is requesting memorials in Bill's name be made to Hospice of the Red River Valley or to St. Joseph's Catholic Church in Fertile, MN.

To order memorial trees or send flowers to the family in memory of William Knox, please visit our flower store.