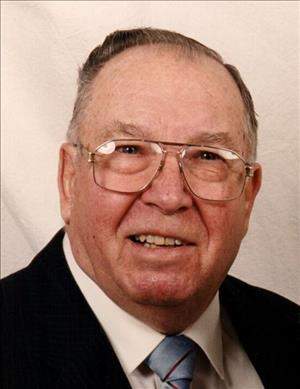 Willard was born at Fargo, ND on October 6, 1931 and was the son of Carl and Edythe Hedlund. His father, Carl, died when Willard was 3 years old, and he moved with his mother and siblings to Hallock, MN, where they lived and farmed. Willard's early education was at the elementary school in Hallock. He later attended and graduated from high school at the Northwest School of Agriculture in Crookston. In 1952 Willard furthered his education while studying auto mechanics at the Dunwoody Institute in Minneapolis. He met the love of his life, Patricia Ann Stevens, while they were both roller skating at the same rink one evening. On September 16, 1952 he entered the US Army and was stationed state side at Ft. Benning, GA. While on leave he and Pat were united in marriage on January 26, 1953 in Minneapolis. Pat joined him at Ft. Benning where they lived until his honorable discharge on September 15, 1954. The couple then settled in Hallock where Bill farmed and later began working for the US Soil Conservation Service. In 1960 Bill, Pat, and family moved to Crookston when he was transferred to the local office of the Conservation Service. After his retirement he drove beet truck for a few years during the harvest, and then became an over-the-road trucker, traveling the country with Pat as his co-pilot. Pat later found employment within the US National Park system. Bill left trucking to join her and became a tour-bus driver, showing tourists the sites in Flamingo National Park in Florida, Denali National Park in Alaska, Flag Ranch National Park in Wyoming, and the Grand Canyon National Park in Arizona. They eventually returned to their home base in Crookston.

Bill and Pat enjoyed many great vacation trips, including a cruise to the Caribbean and through the Panama Canal, taking a houseboat trip down the Mississippi River, and 3 visits to Hawaii. He was a former member and trustee of the Episcopal Church in Crookston, and he and Pat had been attending the Evangelical Covenant Church in Crookston. Bill loved doing carpentry work around their home, and jumping in the car with Pat to make a road trip. In declining health, Bill moved to Valley 4000 in Grand Forks in August, 2016. A few months later, in December, he became a resident of the Villa.

A memorial service for William "Bill" Williams will be held at 1:00 p.m., Tuesday, January 31, 2017, at the Stenshoel-Houske Funeral Home in Crookston with Pastor Bill Humiston, officiating. Visitation with the family will be for one hour prior to the service. Military honors will provided by the Crookston Veterans Council. Inurnment will take place in Oakdale Cemetery, Crookston, in the spring.

Visitation with the family will be for one hour prior to the service.

To order memorial trees or send flowers to the family in memory of Willard Williams, please visit our flower store.