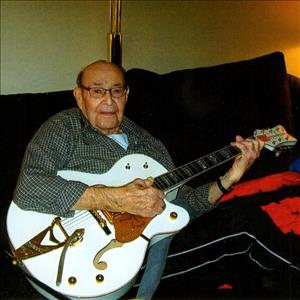 Wallace (Wally) Ray Martin was born on March 20, 1924 in Hewitt, MN to Roy Martin Anna Martin. Wally worked on the railroad at age 15, and bought his first guitar. He joined the Navy on 9/11/1943, and fought in the South Pacific on the Destroyer USS Greiner DE37. He was discharged on 12/21/1945. Wally then started working at Northern Co-op in Wadena, MN in the warehouse. He married Joyce Marilyn Noe on June 30, 1946. He then started driving transport for Northern Co-op and was promoted to driver dispatcher in Crookston, MN. They moved to Crookston in 1957, where Wally drove for over 40 years before retiring in 1986. He was awarded after he drove one million miles without an accident. Wally then started his own business which ended up becoming Martin's towing. Wally always enjoyed playing the guitar. In 2005 he started the M&D Band with his sons, Steve and Jerry; daughter, Barb; and Chuck, Weasel, Morris, and Dione. He also played in a band at several nursing homes with Clem, Dennis K., Dennis T., and Marlo. Wally also enjoyed working on cars, trucks, and tractors. Although he was a truck driver, Wally was an excellent mechanic and carpenter. Wally is preceded in death by his parents, Roy and Annie (Persons) Martin; sisters, Eva, Hazel, and Vera; brothers, Cecil, Edwin (Ted), Clayton, Norman, and Merlin. He is survived by three sons and two daughters-in-law, Steve and Kathy Martin, Mike and Karen Martin, and Jerry Martin, all of Crookston, MN; a daughter and son-in-law, Barb and George Schroeder of Moorhead, MN; grandchildren, Stephanie, Chris, Jonathan, Megan, Matt, Melissa, Breanna, Dustin, Ryan and Melissa; 19 ½ great-grandchildren; a brother-in-law and sister-in-law, Ken and Fonda Noe of Parkers Prairie, MN; a sister-in-law, Darlene of Wadena, MN; and many nieces, nephews, and other relatives. The funeral service for Wallace Martin will be held at 2 p.m. on Wednesday, 5/4/2016 at the First Church of Christ in Crookston, MN. With Pastor Dave officiating. There will be a visitation prior to the service from 12-2 p.m. Interment will be at Oakdale Cemetery in Crookston, MN. Lunch will be served following the interment.

To order memorial trees or send flowers to the family in memory of Wallace Martin, please visit our flower store.