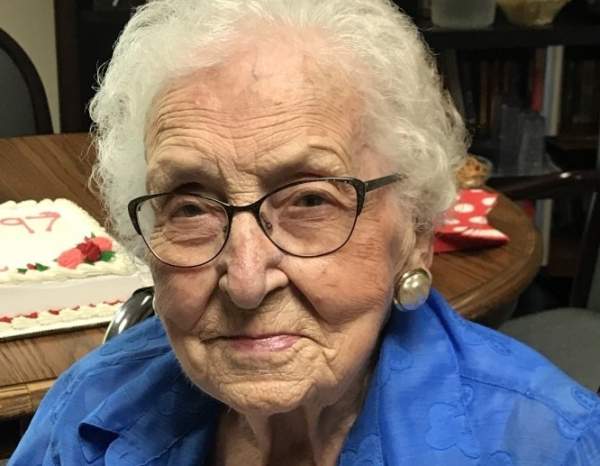 Vivian Doris Arel, age 98, of Crookston, MN, passed away on Saturday, December 12, 2020, at the Villa St. Vincent Nursing Home with family by her side.

Vivian Doris Ogaard was born on July 22, 1922, in Crookston, MN, the daughter of the late Louis and Victoria (Desrosier) Ogaard.  She was raised in Crookston, MN, and graduated from Crookston Central High School in 1940.  On September 29, 1941, Vivian was united in marriage to Harvey Joseph Arel at the Cathedral of the Immaculate Conception in Crookston.  She and Harvey took over his family’s farming operation, working the same land that he grew up on.  Together they raised 5 children, Barbara, Gloria, Kenneth, Daniel, and David.  Sadly, Harvey passed away on December 6, 2008.  In addition to being - devoted wife and mother Vivian worked at Bridgeman’s, Woolworth’s, and then for 20 years at Munn’s Jewelry.  In 2000, she and Harvey retired from farming and their other jobs and moved into Crookston.  In her free time, she liked to travel, play cards, sew, and bake.  She was also very proud to be the oldest living member of St. Peter’s Catholic Church in Gentilly, MN.

Mass of Christian Burial for Vivian will be celebrated on July 10, 2021 at 11:00 a.m. in St. Peter’s Catholic Church in Gentilly, MN, with The Very Rev. Vincent Miller, presiding. Visitation with the family will be for one hour prior to the funeral. Masks will be required and social distancing observed unless COVID-19 restrictions change. Interment will be in St. Peter’s Cemetery. The Mass will be livestreamed by logging on to www.stenshoelhouske.com and going to Vivian's obituary shortly before Mass time and clicking on the prompt to view the service.

To order memorial trees or send flowers to the family in memory of Vivian Arel, please visit our flower store.