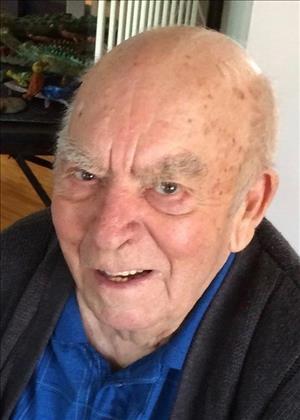 Vance Duane Schipper, 86, a lifelong resident of rural Crookston, Minnesota, passed away unexpectedly at Villa St. Vincent in Crookston, Minnesota, on December 13, 2016. Vance was born in Crookston on May 8, 1930 to Edward and Sylvia (Frisbie) Schipper. He grew up on the family's farm, and even as a young boy began working with his father and brothers helping with everything from spring planning to fall harvest. Vance received his education in a Polk County country school and the Crookston public schools, and graduated from Central High School in 1948. At the age of seventeen, he enlisted in the Minnesota National Guard and was stationed at Camp Rucker, Alabama in 1950. He received his honorable discharge from the US Army in 1952. Vance was united in marriage to June Marion Segler of Dothan, Alabama on June 12, 1954, in a ceremony that took place in Dothan. The young couple purchased a farm in Parnell Township, rural Crookston, and Vance began his own farming operation. Together, Vance and June raised four children: Ila, Quinn, Vana and Leah. During these years Vance also worked on the construction of the American Crystal Sugar Company factory in Crookston. After Crystal opened, he was employed as a chemist in the lab during the winter campaign season for the next twenty-five years. Vance was very interested in alternative energy sources and became a 'solar energy pioneer.' He and June built an energy efficient house on their farm in 1981, with the technology receiving a lot of regional attention. After his retirement from farming, Vance entered into a partnership with his cousin, Bryan Schipper, operating a used car and utility trailer business. He eventually went on his own with the trailer part of the business and became well known throughout the area as "The Trailer Man". In 2004 Vance and June moved from the farm to a home in Crookston Township, near Crookston. Vance had been very active in the Church of Christ since his childhood. He served as an Elder and Chairman of the Church Board for many years. He also served on the Boards of the Oakdale Cemetery Association and the Polk County Historical Society. He was a longtime member of Crookston Masonic Lodge 141 AF & AM and the Order of Eastern Star, and served terms as Lodge Master and Worthy Patron. He was also a member of Crookston's American Legion Post #20. As one of the founders of the local Habitat for Humanity, he helped build several houses in Crookston. The City of Crookston honored Vance and June as "Experienced Americans" in February 1999. To Vance's many friends he was known as a hard worker and good neighbor; always cheerful despite adversity, and ready to greet you with his signature "Happy Day!" To his family he became a devoted husband, father, grandfather, great grandfather, and great-great grandfather. Vance's beloved great-granddaughters became God's sweetest gift in his declining years. Vance leaves his loving wife of 62 years, June; their four children: Ila (Luis) Martinez of Wylie, TX, Quinn (Becky) Schipper of Stillwater, OK, Vana (Peter) Buckland of Webb City, MO, and Leah (Steve) Hanson of Council Grove, KS; six grandchildren: Brenna Kelley of Wylie, TX, Casey (Sarah) Pahlen of Ft. Worth, TX, Skylar Schipper of Carlsbad, CA, Audrey Buckland of Baltimore, MD, Austin (Leah) Buckland, and Alex Buckland of Webb City, MO; six great-granddaughters: Naomi Kelley (Tyler Stiles), Savannah and Karma Kelley, and Madison, Katelyn June and Taylor Pahlen; and a great-great-grandson Nathan Stiles. He is also survived by his sister, LaVada Hanson of Detroit Lakes, MN; two sisters-in-law, Walda Schipper of St. Louis Park, MN, and Audrey Schipper Murphy of Scottsdale, AZ; a brother-in-law, Sid B. Segler of Palm Bay, FL; and several nieces, nephews and cousins. He was preceded in death by his parents, Ed and Sylvia; June's parents, Jack and Eula Segler; two brothers, Burl and Dale Schipper; two half-sisters Josephine Raymond and Vernadine McIver; and two nephews, Scott and Todd Schipper. May God bless the memory of Vance Duane Schipper. The memorial service celebrating the life of Vance Duane Schipper will be held at 2:30 p.m., Monday, December 19, 2016, at the Church of Christ, 321 5th Avenue South, in Crookston, with Pastor Dave Johnson, officiating. Visitation with the family will be for one hour prior to the funeral. Military honors will be provided by the Crookston Veterans Council. In lieu of flowers, the family requests that memorials be given in Vance's memory to the Church of Christ or a charity of your choice. www.stenshoelhouske.com

Visitation with the family will be for one hour prior to the funeral.

To order memorial trees or send flowers to the family in memory of Vance Schipper, please visit our flower store.