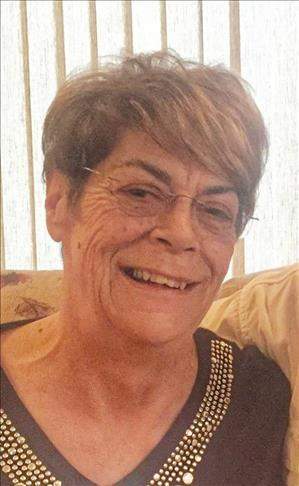 Teri Jeanne Engel, 69, of Fisher, MN passed away at Sanford Hospital in Fargo, ND on Tuesday, December 13, 2016 with her loving family by her side. She was diagnosed with cancer shortly before Thanksgiving. Teri was born in Crookston, MN on August 19, 1947, the daughter of Ray and Jeanne (Quigley) Hollands. She grew up in Fisher, was baptized and confirmed at St. Francis Church, and graduated from Fisher High School in 1965. She then attended cosmetology school in Grand Forks and earned her license as a cosmetologist. On April 22, 1967 Teri was united in marriage to Roderick Engel at St. Francis Catholic Church. The couple made their home in Fisher all their married lives and together raised 4 children: Roderick, Nicole, Scott, and Heidi. Teri's life centered on her kids and grandkids. She never missed any of their sporting events and school activities and loved being involved in their lives. All of Teri's kids, grandkids, and many referees were very familiar with Teri's voice during sporting events. She was always passionate about rooting for her loved ones.

Teri loved the outdoors. She spent countless hours fishing with her husband, her kids, grandkids, and friends on Lake of the Woods and took as much joy in watching others catch fish as she did herself. She also enjoyed hunting deer, ducks, geese, and grouse with her father and husband when she was younger. Not only did Teri love and appreciate the outdoors, she and Rod instilled a great love for the outdoors in their children too.

Teri leaves behind her husband of 49 years, Rod; their 4 children and spouses: Roderick (Karen) Engel of Pelican Rapids, MN, Nicole (Jason) Wardner of Crookston, MN, Scott (Janna) Engel of Ada, MN, and Heidi (Nick) Hawkins of Fargo, ND; 10 grandchildren: Shari Olson and Katie (fiancé, Ryan Smith) Hanson, Erik and Austin Engel, Cody, Logan and Brianna Wardner, Ryan and Morgan Engel, and Nicholas Hawkins, Jr.; 3 great-grandchildren: Jacob, Grace, and Fynn; a brother and sister-in-law, Merle and Pat Hollands of Fisher, MN; and many nieces, nephews, other relatives, and friends. She was preceded in death by her parents, Ray and Jeanne Hollands; brother, William Hollands; and nephew, Lance Hollands. A visitation with Teri's family will be held at the Stenshoel-Houske Funeral Home in Crookston on Saturday, December 17, 2016 from 5-7:00 P.M., with a 7:00 P.M. prayer service and time of memory sharing. At Teri's request there will be no funeral service. In lieu of flowers the family requests that memorials be given in her name to the Roger Maris Cancer Center in Fargo, ND or Hospice of the Red River Valley in Grand Forks, ND.

At Teri's request there will be no funeral service.

To order memorial trees or send flowers to the family in memory of Teri Engel, please visit our flower store.