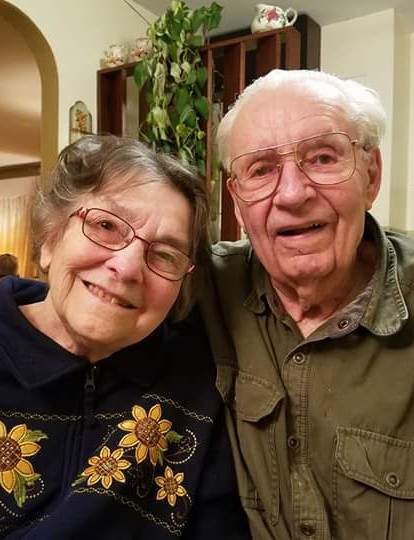 Susan Prady was born on May 1, 1931, at home in Caribou, MN, the daughter of the late Alex and Rose (Karol) Prady.  She spent her childhood in Caribou and her family moved to Crookston when she was a freshman in high school.  She graduated from Crookston Central High School in 1949.  While she was in high school, she worked at St. Francis Nursing Home which is now Villa St. Vincent. On January 27, 1950 she was united in marriage to Kenneth Swenson at Our Savior's Lutheran Church. They would be blessed with 5 children: Dennis, Steven, Marlene, Byron, and Robert. Sadly, Steven passed away on August 14, 1953 when he just 3 days old.  While the children were small Susan was a devoted stay at home wife and mother and worked part-time at Johnston’s Grocery Store.  Later she worked at Lincoln Elementary School as a teacher’s aide and in the office.  She then worked in the financial department for Polk County Social Services until her retirement.  In her retirement she would help at the family business, Gust Swenson and Sons, which was first established by Kenneth, his father, Gust, and brother, Donald.

In her free time, Susan loved to be outdoors.  She tended her garden, went camping or to the cabin, and could trap shoot better than most of the men.    Kenny was one of the founding members of the Crookston Gun Club and Susan and he spent nearly every Monday at the range trap shooting. It was said that she could outshoot Kenny regularly, she scored a perfect 25 before he could. She also bowled and was in a league in her younger years.

To order memorial trees or send flowers to the family in memory of Susan Swenson, please visit our flower store.