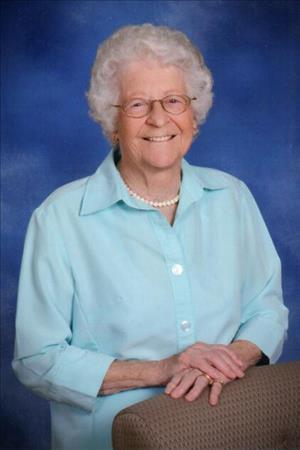 Solange (Asselin) (Beauchane) Radke, 94 of Crookston, MN passed away on Wednesday, January 11, 2016 at the Villa St. Vincent in Crookston, MN. Solange was born on April 7, 1922 in Crookston, MN to Fred and Clemence (Gousse) Asselin. She attended St. Joseph's Academy and later Fisher Public School. She graduated from Fisher High School in 1939. At the age of 50 she went to Agassiz Valley School of Practical Nursing and graduated with an Associate Degree in nursing in 1973. On February 19, 1941 Solange married Alton Beauchane in Red Lake Falls. They had five children, Kenneth, Daniel, Dorothy, Ronald and Richard. Solange worked for Woolworth's in Crookston until the mid-1950's. She then worked with Alton in construction until 1973. After nursing school she went to work for Riverview Nursing Home as a Licensed Practical Nurse from 1974-1987 and retired on May 22, 1987. On January 5, 1980 she married Elmer Radke in Crookston. She is survived by her children Kenneth (Patricia) Beauchane, of Fertile, MN; Daniel Beauchane of Owensville, IN; Dorothy (Ernest) Franklin of Orange Park, FL; Ronald (Monica) Beauchane of Red Lake Falls, MN and Richard Beauchane of Red Lake Falls, MN. Grandchildren Jody (Stacy) Beauchane, Chad (Jeannette) Beauchane, Eric Franklin, Ann (Randal) Gillund, Elliott (Tara) Franklin, Justin (Ruth) Beauchane, Deborah (Samuel) Higginbotham, Michelle (Anthony) Touketto, Christopher (Nichole) Beauchane; 23 great grandchildren, with three more on the way; five step children, Dean (Ginny) Radke, Connie (Robert) Nichols, Greg (Karen) Radke, Ken Radke, and David (Sandy) Radke. She is preceded in death by her husband, Elmer; parents, Fred and Clemence; brother, Robert Asselin and his wife, Virginia; sister, Simone Audette and her husband, Walter; infant brother, William Eli Asselin; nephew, Don Audette; and niece Dolores (Audette) Ricard and her husband, Tom . There will be a visitation from 5-7:00 p.m. with a prayer service at 7:00 p.m. on Monday, January 16, 2017 at the Cathedral of the Immaculate Conception in Crookston, MN. The funeral mass will be held at 2:00 p.m. with a visitation one hour prior to service on Tuesday, January 17, 2017 at the Cathedral of the Immaculate Conception in Crookston, MN. Interment will be at Calvary Cemetery in Crookston, MN in the spring. Solange was a member of the Cathedral of the Immaculate Conception, Sacred Heart Circle and a former Hospice volunteer. She loved playing cards, walking and spending time with her children, grandchildren and great grandchildren.

To order memorial trees or send flowers to the family in memory of Solange Radke, please visit our flower store.