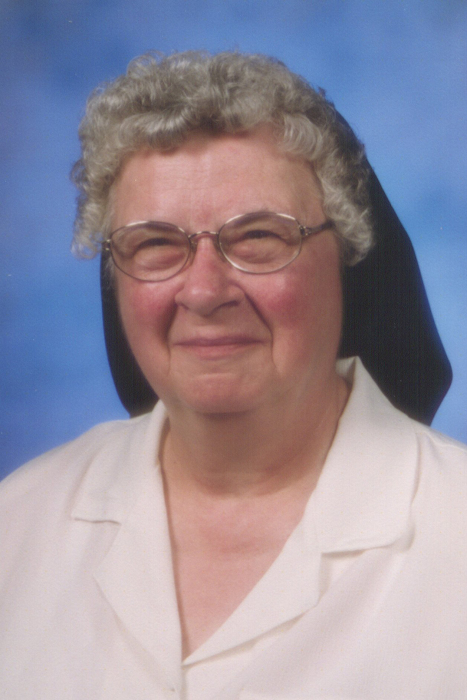 Sister Yvonne was born January 27, 1933 in Red Lake Falls, MN, to George and Rose (Kuld) Schafer, the youngest of four children. She was baptized by Father Henry Pelger and was given the name Doris Mae. For her elementary education, she attended District 63 country school, located on a corner of their farm. When she was in the fourth grade, her family moved to a different farm and she and her siblings could attend Saint Joseph’s School in Red Lake Falls. She attended Mount Saint Benedict Academy for high school. She was involved in Catholic education since fourth grade, first as a student and then as a teacher.

Sister Yvonne first thought about being a sister while in grade school because she admired the sisters who taught her. She said that she was inspired also by her aunt, Sister Ivan from Saint Benedict’s Monastery in Saint Joseph, MN. After graduation from high school, she entered Mount Saint Benedict Monastery. Before she entered the monastery, she recalled Sister Pancratius Thomas affirming her vocation when she said “You have chosen wisely.”  She was invested in the Benedictine habit on July 2, 1950 when she received the name, Sister Yvonne. Sister Yvonne made her final monastic profession on July 11, 1954.

Sister Yvonne was a teacher for more than 50 years, and she served in Lefor, ND, and Osseo, Detroit Lakes, Mahnomen and Moorhead, MN. She was the principal in Moorhead and Mahnomen where she was also Director of Religious Education. Sister Yvonne wrote that that she was convinced that “the ministry of education is rooted in the Gospel – learning and sharing (that) the Good News is Jesus.”

Sister Yvonne possessed qualities that promoted a happy and healthy school environment: a generous and wholehearted spirit, an innate respect for each student and faculty member and a listening heart. Sister Yvonne was a nature lover, and she enjoyed outdoor activities, picking blueberries, gathering colored or enjoying the Christmas lighting around town.

Sister Yvonne loved to see the Christmas lights around town. When it came time to choose the Christmas tree, the sisters with whom she lived wondered how it was that she always chose the coldest day of the year!

And then there was the annual school marathon. Most of the participants were bikers, but not Sister Yvonne! She was one of the hardy walkers who made the eight-mile trek – no shortcuts, no rides for her!

She is survived by her sister, Sister Lucille, OSB, sister-in-law Mary Ann, many nieces and nephews and the Sisters of Saint Benedict.

Gifts in memory of Sister Yvonne may be given to Mount Saint Benedict Foundation.

To order memorial trees or send flowers to the family in memory of Sister Yvonne Schafer, please visit our flower store.