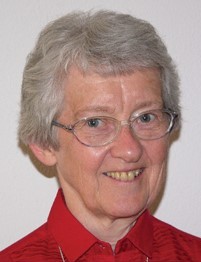 Sister Vivian Lillian Miron was born December 17, 1934 in Hugo, MN to Mesael and Julia (Brisson) Miron , the youngest of their nine children.  Her education began in a one-room school and continued at St. Joseph’s Academy in Crookston, MN where she graduated in May 1952.  She wrote, “That is when I felt the call to religious life.” In September 1952, Sister Vivian entered the Sisters of St. Joseph in Crookston, MN and the following March received the habit and the religious name of Sister Mary Julianna.   She made her First Profession of Vows in 1954 and Final Profession in 1959.  After Vatican II, Sister returned to her baptismal name of Vivian.

In June 1958, Sister Vivian was awarded a Bachelor of Science degree in Nursing from the College of St. Catherine and St. Joseph’s Hospital School of Nursing in St. Paul, MN.  She later earned certificates in nursing administration and gerontological nursing, and a license for administration in a 50-bed rural hospital.  Her ministry in nursing and administration took her to St. Joseph’s Hospital in Park Rapids, MN, Trinity Hospital in Baudette, MN, Villa St. Vincent Nursing Home in Crookston, MN, Presentation Care Center in Rolette, ND, Santa Rosa Medical Center and Woodland Health Center and Holy Cross Clinic in San Antonio, TX.

Sister Vivian has also served her religious community as administrator, regional and general councilor, in Nicaraguan ministry, and as community coordinator and assistant administrator of Marywood Residence in Crookston.

One of her papers entitled “7 Most Magnificent Skills I Used” offers insight into how she managed to carry multiple responsibilities and provide innovative approaches to training of nurses and nursing supervisors.  “I used my skills to organize, plan and evaluate.  I trained personnel, encouraged them and help them believe in themselves and develop their abilities.”

Sister Vivian “retired” to a less busy life in 2010 when she became a tenant at The SUMMIT in Crookston.  For the next few years, she led the CSJ community in group prayer.  As her health diminished, so did her energy to continue correspondence and phone calls to friends and family.  She practiced her Solitaire skills frequently during the day and wore out at least two decks of cards.

In addition to the Sisters and Associates of the Congregation of St. Joseph, Sister Vivian is survived by her sister Mabel (Adam) Mikrot of North St. Paul and many nieces and nephews.  She was predeceased by her parents and sisters Martha Peltier and Bernadette Mikrot and brothers, Clifford, Gilbert, Thomas, Marcel and Daniel Miron.

The Mass of Resurrection will be celebrated on Wednesday, August 19, 2020 at 3:00pm at the Cathedral of the Immaculate Conception in Crookston, MN with Father Vincent Miller presiding. Memorials may be offered to the Congregation of St. Joseph and the Villa Foundation.

To order memorial trees or send flowers to the family in memory of Sister Vivian Miron, please visit our flower store.