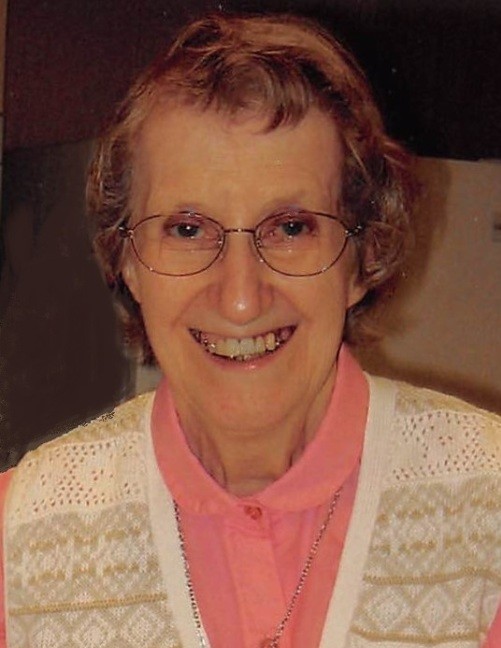 Sister of St. Joseph, Rose Mary Toenyan died Tuesday, January 8, 2019 at Villa St. Vincent in Crookston, Minnesota. A Mass of the Resurrection will be celebrated at 1:00pm in the Chapel at Villa St. Vincent, with Father Vincent Miller, presiding.   Visitation and Prayer Service will be held at the Villa Chapel from 10:00am to 11:30am, at which time a meal will be served prior to the service.  Burial will follow immediately in Calvary Cemetery in Crookston.

Sister Rose Mary was born May 6, 1930 in St. Rosa, Minnesota to Robert Toenyan and Rose (Weber) Toenyan.  She attended school in Blackduck, Minnesota and entered the Sisters of St. Joseph in Crookston on September 8, 1955 and later as a novice, received the name of Sister Mary Barbara.  She made her First Vows on May 15, 1958 and Final Vows on August 5, 1963.  During the early 1970s, she returned to her baptismal name

Sister Rose Mary attended the University of Minnesota, Technical College in Crookston in 1978; she also attended St. Mary’s Junior College in Minneapolis, Minnesota where she received a Certificate as an Occupational Therapy Assistant in 1983.

Ministry for Sister Rose Mary included cooking and meal service for more than 10 years at St. Joseph’s Academy, Crookston, St. Joan of Arc Convent, Minneapolis, Brady Convent, West St. Paul, and St. Joseph’s Provincial House, Marywood Road Crookston.  She became famous with students and community members for her caramel rolls and “Bishop’s Bread”.  After receiving the Certificate in Occupational Therapy, Sister Rose Mary was placed in charge of the activity Department at Pioneer Nursing Home in Baudette which later became LakeWood Care Center; Sister Rose Mary ministered there for a total of 23 years before retiring to Summit Apartments in Crookston in 2004.

Sister Rose Mary’s hands were never idle as witnessed by the challenging and beautiful embroidery she produced, the crocheted items she shared with family and colleagues, and the art work which almost nobody saw due to her reticence to call attention to herself.  She loved music and found time to take piano lessons to augment what she had learned in her family.  It was a great sorrow to set aside her artistic work when her eyesight began to fail.  Her humility and trust in God did not waver but only seemed to deepen and grow as she let others wait on her, something which she accepted without complaint.

Sister Rose Mary was predeceased by her parents, and brother, Clarence Toenyan.

Memorials may be given to the Congregation of St. Joseph or the Summit/Villa Foundation.

The Stenshoel-Houske Funeral Home is in charge of arrangements.

To order memorial trees or send flowers to the family in memory of Sister Rose Mary Toenyan, please visit our flower store.