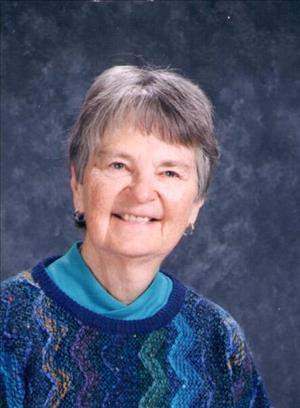 Sister Rita Marie Bonneprise, CSJ, passed away quietly at Villa St. Vincent in Crookston, Minnesota on Monday, May 4, 2015. Sister Rita Marie was born January 10, 1929 to Joseph and Matilda (Kromrey) Bonneprise in Osceola, Wisconsin. Her early formative years were spent in Osceola with her sister Joan and brothers, John and Ben. Her parents enrolled her at St. Joseph's Academy in Crookston, where she graduated in May of 1946. Having great admiration for the sisters who taught her, Rita Marie entered the Congregation of the Sisters of St. Joseph on July 22, 1946. She received the religious name of Sister Mary Michael; in 1948 she pronounced her First Vows and made her Final Profession in 1951. Teaching and administering schools were great loves of Sister Mary Michael. Between 1949 and 2000, she ministered at St. Rose School, Argyle, MN; St. Joseph's Academy, Crookston, MN; St. Peter's School, Park Rapids, MN; St. Anne's School, Somerset, WI; St. Joseph's School, West St. Paul, MN: St. Joan of Arc School, Minneapolis, MN; and St. Richard's School, Richfield, MN. When new fields of ministry became an option for sisters, Sister Mary Michael's pioneering and adventurous spirit became apparent. Returning to her baptismal name and after further training, she branched out as a religious educator in Strandquist, MN and Fargo, ND; she served as a family therapist at Glenmore Recovery Center in Crookston, MN. Later, she served the Hmong Community in St. Paul, MN as a pastoral minister. In Brooklyn, NY, Sister Rita Marie befriended women who had formerly been incarcerated, and at Marian Care Center in St. Paul, she helped the elderly. Her personal experiences and encounters with people with various ages and cultures and the charism of the Congregation of St. Joseph have been the inspiration of her work, relationships and energies. While recuperating from a heart attack, Sister Rita Marie lived at Marywood, where she began writing a book of poems. "New Horizons" was published in 2011 after her move to the Summit Apartments. Sister Rita Marie is survived by the Sisters of St. Joseph; her sister, Joan (Jerry) Felling of Osceola, WI; brothers, John Bonneprise of Osceola and Ben (Evelyn) Bonneprise of Tucson, Arizona; niece, Rita McKee of Rochester, MN; as well as other nieces, nephews, relatives and friends. Sister Rita Marie's parents preceded her in death. Services for Sister Rita Marie Bonneprise will be held on Monday, May 11, 2015, at the Villa St. Vincent Chapel in Crookston, MN. A Wake Service will be held at 3:00 PM, and the Mass of Resurrection celebrated at 4:00 PM. On Wednesday, May 20, 2015, an 11:00 AM Mass of Resurrection will be celebrated at Assumption Church in Farmington, WI. Interment will be in the family plot in St. Mary's Cemetery, Farmington. Memorials preferred to the Congregation of St. Joseph, Mission Advancement Office, 3134 Hundred Oaks Ave, Baton Rouge, LA 70808-1541.

11:00 AM
Assumption of the Blessed Virgin Mary

To order memorial trees or send flowers to the family in memory of Sister Rita Bonneprise, please visit our flower store.