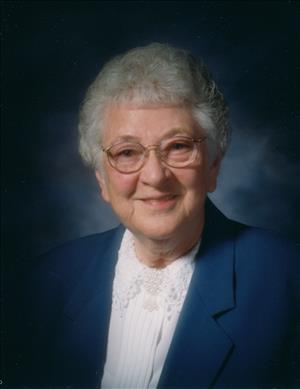 "Here I stand, knocking at the door. If you hear me calling and open the door, I will come in and we will have supper together." (Rev. 3:20). The call of Christ guided the entire life of Sister Regina from the time she heard it vaguely at the age of nine years until she heard it clearly in the eternal banquet hall in heaven.

Catherine Marie Hansmann was born in Moorhead, Minnesota on Christmas Eve., 1923, the fourth of the seven children of Joseph and Regina (Carlson) Hansmann. Catherine Marie attended Saint Joseph School in Moorhead where she was taught by sisters from Mount Saint Benedict. She graduated from Moorhead Public High School. Sister Regina recalled Sister Margaret Mary who was to be a great influence on her later life. Sister Margaret Mary spoke to them about the necessity of prayer, and Catherine took her seriously and prayed in the school, in the theater and on the street.

From Sister Margret Mary, Catherine learned that what she did matters. Sister Regina wrote, "Sister encouraged me to greet the people I knew and smile at them. I set the example and soon many north-side kids were doing the same. A teacher from the public school told the sisters that she really appreciated the greetings from the polite children from Saint Joseph's. When the sisters told us they were proud of us, we learned that the little things can make a difference."

Catherine entered Mount Saint Benedict Monastery in Crookston in July, 1943. In 1944, she was invested in the Benedictine habit and received the name Sister Regina. She made her permanent monastic profession in 1947. She said that when she was asked why she wanted to be a sister, she said that she wanted to do God's work, but secretly she liked the long black rosaries that clicked at the sides of the sisters.

Sister Regina earned a bachelor's degree from the College of Saint Benedict, Saint Joseph, Minnesota, and also studied at Moorhead State University. She served as a teacher in the parochial schools of East Grand Forks, Bemidji, Barnesville, Benson, Red Lake Falls, Moorhead, Detroit Lakes and Mahnomen. She also taught in the summer catechetical schools in many rural parishes and in the summer program staffed by the Benedictine Sisters for migrant farm workers in Moorhead and Crookston.

Sister Regina recalled helping to organize the first science fair for seventh and eighth graders at Saint Joseph's. Busloads of students arrived to see the exhibits which included baby chicks that hatched in time for the fair. Sister Regina loved to teach art and the entire afternoon on Fridays was devoted to it.

In 1981, Sister Regina answered the call to serve as a missionary in Bogotà, Colombia, South America where she taught at Collegio San Carlos, a school sponsored by the monks of Assumption Abbey, Richardton, ND. After returning to Crookston in 1983, Sister Regina returned to classroom teaching in the Crookston diocese until 1990. At that time she became the coordinator of the Learning Center at Care and Share in Crookston where she taught English as a second language and prepared adult students for their GED (Graduate Equivalent Degree). She was much respected and dearly loved by her students because of her gentle ways and her sense of humor. She credited her success in teaching to the work of the Holy Spirit.

Because of frail health, Sister Regina retired from the Learning Center in December, 2003. She became a resident in the Assisted Living Center in Good Shepherd Hall in January, 2004 where she could live a more contemplative life by engaging in centering prayer and studying monastic life.

Sister Regina eventually was admitted to Villa Saint Vincent, and she continued serving by leading prayer groups and visiting other residents, especially where she could bring joy to others.

She considered herself little and poor and believed that was why she could say that she had been very blessed and taken care of by God.

Sister Regina was preceded in death by her parents, two brothers, Edward and John, and sisters, Mary (Gene) Peterson and Margaret (Alfred) Ernst. She is survived by two sisters, Gertrude (Lowell) Smith and Dorothy (Donald) Monson of Fargo, several nieces, nephews and other relatives as well as by the members of Mount Saint Benedict Monastery.

To order memorial trees or send flowers to the family in memory of Sister Regina OSB, please visit our flower store.