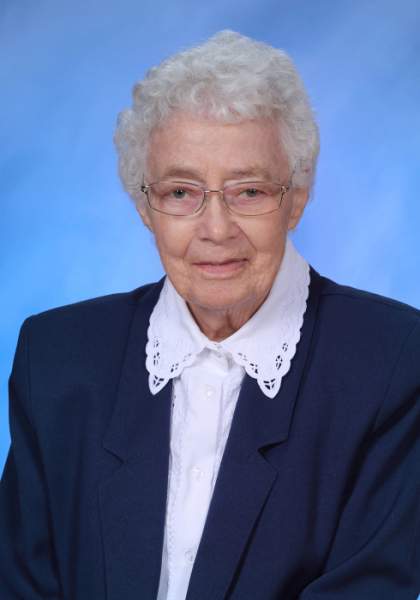 Agnes Hermann was born in Georgetown, Minnesota on November 30, 1925, the oldest girl of four of Andrew and Delia (Denery) Hermann. They had a brother a year older than Agnes. When Agnes was born on the feast of Saint Andrew, her parents considered naming her Andrea, but her baby brother was named Andrew, so the name Agnes was chosen instead.

Agnes attended Georgetown Elementary School (a two-room school) for eight years. Her high school years were spent at Mount St. Benedict High Academy in Crookston, Minnesota. After that, she entered the Sisters of Saint Benedict. Upon becoming a novice, she received the Benedictine habit and the name Sister Petronilla. Her sisters Mary (Sister Olivia) and Angela (Sister Agatha) also became members of the community.

In 1944 the community enrolled her at Saint Cloud Hospital School of Nursing in Saint Cloud, MN. Upon graduation in 1947 she was assigned to active duty as a registered nurse for one year in the operating room, followed by ten years as head nurse on the surgical floor first at Saint Vincent's Hospital, then at Saint Francis Hospital in Crookston.

In 1957 Sister Charitas Brophy, who was the hospital administrator, asked her to give up her beloved surgical nursing for one year to fill in as the director of St. Francis Hospital School of Practical Nursing. Twenty-one years later when Sister Petronilla was requesting to leave nursing, Sister Charitas was chair of the Mount Saint Benedict Personnel Committee. The committee granted her request

Her years of nursing/nursing education were happy, fulfilling, and successful. As a nurse educator, she recruited a dedicated and efficient faculty,and a strong camaraderie developed.

When Saint Francis Hospital closed in 1970, so did the school of nursing, but Sister Petronilla and her staff became the core-faculty hired by the public school system to direct the newly formed Agassiz Valley School of Practical Nursing. Sister Petronilla was the director of this program and was instrumental in developing a plan by which LPNs could work to become registered nurses without having to repeat classes common to both programs. When this plan was in place in 1979, Sister Petronilla felt called to retire from nursing.

Living at the Mount was a new experience for Sister Petronilla. The only other time was her novitiate year. Being able to engage in community life, especially the Liturgy of the Hours, was a gifted experience. When Sister Cathi Merck became prioress in 1999, she asked Sister Petronilla to accept the assignment of writing the intercessory prayers for the twice-daily Liturgy of the Hours.  Sister Petronilla found that writing these prayers was a life-giving assignment and one that she fulfilled until 2012 when failing vision forced her retirement. Health­ issues were constant in Sister Petronilla's life. In 2010 she moved into Good Shepherd Hall, the community's the Assisted Living Department, and she moved to Villa Saint Vincent in 2018.

Sister Petronilla enjoyed sewing. In any spare time, she was at her sewing machine or doing embroidery or crocheting. With failing eyesight, Sister Petronilla had to give up fine needlework but took up a new needlepoint craft with plastic canvas. Whenever she sent items to the Polk County Fair, she won blue/red honors for her crocheted and craft items.

Sister Petronilla was preceded in death by her parents Andrew and Delia Hermann, brother Andre and sister Helen Lutgens and Sister Olivia Hermann. She is survived ny Sister Agatha Hermann, may nieces and nephews and the Sisters of Saint Benedict of Crookston.

Gifts in memory of Sister Petronilla may be given to Mount Saint Benedict Foundation.

To order memorial trees or send flowers to the family in memory of Sister Petronilla Hermann, please visit our flower store.