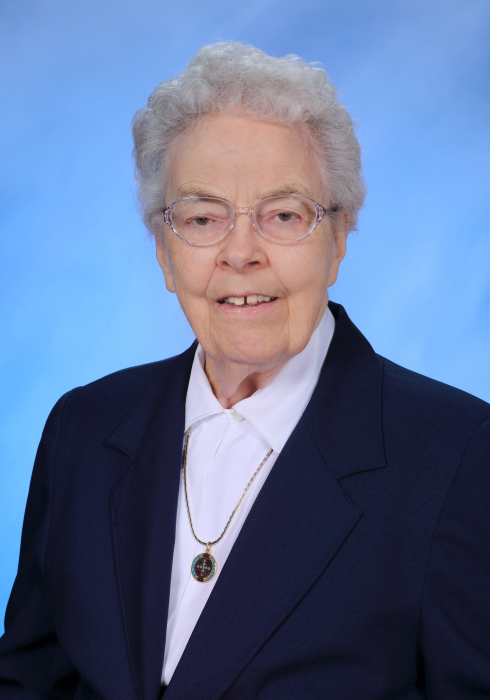 Sister Olivia Hermann died at Villa Saint Vincent, Crookston, on September 24, 2018. Mary Catherine Hermann, the third of the four girls and one boy of Andrew and Delia (Denery)  Hermann, was born on February 8, 1927 in Georgetown. Sister Olivia ascribed the awakening of her call to monastic life to the encouragement, prayer-life and truly happy and Christian attitudes of her parents as they nurtured the growth of their children in their rural Georgetown home. Her earliest contact with sisters was with her aunts, a Sister of Saint Benedict and a Sister of Saint Joseph who frequently visited at their farm home.


Sister Olivia wrote about the visits of these sisters, “I don't know how excited they were about tramping through our barn or chicken coop, but they made it look as though it was one of the highlights of their visit. These two sisters also joined in games and were just fun to have around.”


During her early school years two sisters from the Mount came each June and taught catechism. She loved this time with the sisters and always wished they could have stayed longer.
She attended elementary school in Georgetown and high school at Mount Saint Benedict, Crookston, MN. From her earliest days her only thoughts about vocation were to become a sister. Only in later years did she realize the influence that the faith of her parents and their love for each other and their children had on this decision.
Sister Olivia related memories about her family. “Since we lived in the country we had no close neighbors to play with. During summer Sundays Mom and Dad often took a nap after our noon meal. During our early years we five children, each a year apart in age, were expected to be relatively quiet. If we met this request Mom and Dad would then join us in a game of softball, anti-over, or horse shoes.”


In this devout Catholic family, the ritual for many Sunday evenings was listening to the Catholic Hour at 5:00 p.m., chores at 5:30, supper, and then 7:00 Benediction at church. Then the family often drove around to look at the crops and later enjoyed a treat of ice cream.


Mary Catherine joined the Benedictine community in 1944 and received the name Sister Olivia. She made her permanent monastic profession in 1948. Her sister Agnes had entered the community in 1941 and received the name Sister Petronilla. A younger sister, Angela, entered the community in 1946 and received the name Sister Agatha.
Sister Olivia studied at Diocesan Teachers’ College in Saint Paul, MN and later received a Bachelor of Music Degree from Alverno College in Milwaukee.
After teaching elementary grades for a few years, she taught private piano lessons. Sister Olivia taught piano lessons for over fifty years at parishes in Red Lake Falls, Moorhead, Osseo, Crookston and Barnesville. She also served as liturgist in Saint Francis parish, Moorhead, for several years. She directed adult and youth choirs in a few parishes and also served as organist. Sister Olivia was the district chairperson for the MN Music Teachers’ Association for ten years.


In Moorhead she participated in the Befriender ministry, visited homes of parishioners on a volunteer basis, and assisted with liturgies at Eventide Home.
After returning home to Mount Saint Benedict, Sister Olivia assisted in tasks around the monastery as she was able. Her health began to deteriorate, and she moved to Villa Saint Vincent.
Sister Olivia was preceded in death by her parents Andrew and Delia, her brother Andrew and her sister Helen (Jack) Lutgens. She is survived by her sisters, Sister Petronilla and Sister Agatha, many nieces and nephews and the Sisters of Saint Benedict.

To order memorial trees or send flowers to the family in memory of Sister Olivia (Mary) Hermann, please visit our flower store.