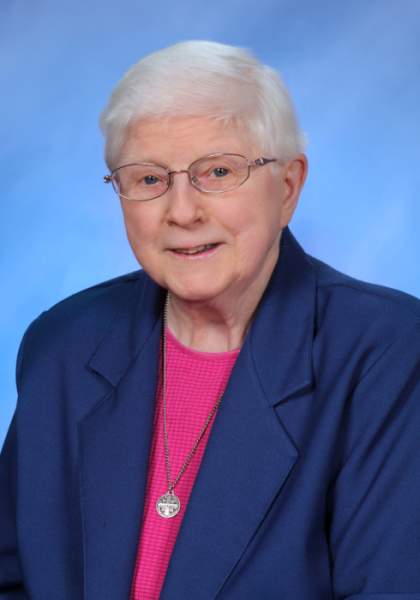 Sister Michelle McGurran, 87, died Thursday, December 7, at Villa Saint Vincent, Crookston. Sister Michelle was born August 6, 1930 in Grand Forks, ND, and was given the name Grace Colleen. Grace, called Colleen, was the second of the fourteen children of William and Grace (Brown)  McGurran. Colleen attended Saint Michael’s Grade School and Saint James High School in Grand Forks, ND, where she was taught by Sisters of Saint Joseph of Carondelet She graduated from high school in Cavalier, ND.

Saint Michael’s Church played a large role in her Irish family: school, first communion, confirmation and other church activities. One of her favorite memories of school was her first grade teacher, whom she described as “very, very old and very kind.  She recalled that in school dramatizations, she always had the role of “Sister” – if there was one. She remembered being charmed by her first communion prayer book and trying to follow the prayers. In the eighth grade Colleen was confirmed at Saint Michael’s Church by Cardinal Muench. Colleen attributed the inspiration to follow a religious vocation to her mother’s expressed desire that one of her children would become either a priest or a sister.

The first Benedictine sister Colleen met was Sister Clare Duffy who arranged for her to visit the Mount. Colleen entered the Crookston Benedictine community in 1949. She was invested in the Benedictine habit in 1950 and she received the name, Sister Michelle. She made temporary monastic profession in 1951 and final profession in 1954.

Sister Michelle earned a bachelors degree from the College of Saint Teresa in Winona, and masters degrees from the University of North Dakota and Fordham University in New York City.

Sister Michelle took the opportunities to study or teach in Germany. In 1966, she was one of 50 secondary school teachers who participated in and NDEA Overseas Institute for Advanced Study in Germany. In 1969 – 1970, she studied for two semesters at the University of Würzburg. Then during the 1974 – 1975 school year, she taught English as a second language in Wuppertal, Germany.

In 1993, she was elected prioress of Mount Saint Benedict when she was confronted immediately with the necessity of demolishing the original monastery building because it was sliding toward the river. In 1996, the sisters moved into new construction which contained a library, archives, chapel, offices and living spaces. During her term of office, the sisters conducted a capital campaign with the goal of raising $975,000, which they exceeded by $50,000 through the great generosity of the sisters’ many friends. Another accomplishment during her term was the opening of Sunrise Center for Children and Families under the direction of Sister Judy Moen.

Upon the completion of her term, she lived with the sisters in Mahnomen. Sister Michelle then spent six years as pastoral minister in Lucan. She found these years satisfying because she could use what she had learned at Fordham.

If one were asked to describe Sister Michelle’s personality, one might use such adjectives as committed, energetic or extroverted. Sister Michelle was passionate about many things, especially Benedictine monastic life, the ministry of women in the Church and Catholic social teachings – especially peace and the dignity of the human person. Bishop Kenneth Povish appointed her with others from the diocese to participate in the first Call to Action gathering, which explored the direction the Church would take in the future. Sister Michelle’s passion peace and justice for the poor created a determination to promote public policies which lightened their burden. As a result she was asked by State Senator Roger Moe, majority leader of the Minnesota Senate, to serve as the first woman chaplain of the Senate.

Sister Michelle is preceded in death by her parents William and Grace McGurran and brothers Joseph, Walter, Tim and Patrick. She is survived by sisters Charis Brossart, Marjorie Bergum, Mary Vonasek, Maureen Sylling and Rita Devine, brothers Michael, Dennis and David, many nieces and nephews and the members of her monastic community.

Gifts in memory of Sister Michelle may be given to Mount Saint Benedict Foundation.

To order memorial trees or send flowers to the family in memory of Sister Michelle McGurran, OSB, please visit our flower store.