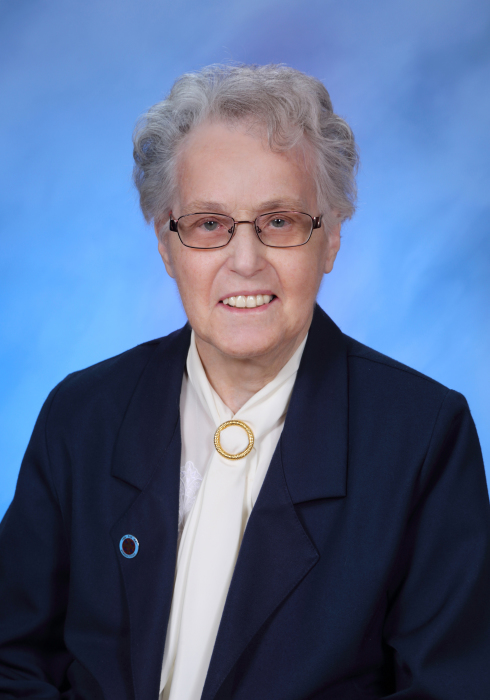 Mary Catherine Neumann was born on September 12, 1930 in Bemidji. She was the ninth of Ernest and Bernadette (Belaire) Neumann’s eleven children. Mary Catherine was baptized by Father Keogh Patnode. When she was of school age, she attended Saint Philip’s Eloementary School. Sister Mary Daniel had fond memories of her childhood, especially of her sister Helen, who was twelve years older than she and of her younger sister Agnes (Peachy). Sister Mary Daniel wrote that she took full advantage of Helen’s love for her. One of her fondest memories of Helen was of her way of making a tea party just for the two of them. Her mother would use the tiny toy muffin pan from Mary Catherine’s toy dishes to make small puffs of bread. Helen used these and the toy dishes to make a tea party just for the two of them.

When Mary Catherine was five years old, her sister Agnes was born. Mary Catherine had the privilege of holding Peachy in her arms while sitting in a rocking chair. Soon Peachy tagged along with her everywhere.

Between her junior and senior years, Helen obtained a job for her at the Golden Rule Department Store. After graduating from Bemidji High School in1948, Mary Catherine went to live with Helen in Saint Paul. She obtained a job at the Department of Education which she held from January to September, 1949. They lived on Summit Avenue, just two blocks down from the Cathedral where they went to Mass. The Benedictine Sisters from Crookston also had a house of studies on Summit and Mary Catherine was able to visit some of them whom she had as teachers in Bemidji. Some of the sisters encouraged her to consider a vocation as a Benedictine sister, and Mary Catherine knew she also wanted it. Her mother knew of her yearning and encouraged her to follow her heart’s desire.

The date set for entering the Benedictine sisters was September 15, 1949. Saying good-bye to her mother and Peachy was difficult, and Mary Catherine was teary-eyed all the way to Crookston. Her father and her brother Eddie, drove her to the Mount and they were brought to the guest dining room and were served lunch. After they left, she was dressed in the black dress of postulants, and that evening at supper was accepted as a postulant. She was invested in the Benedictine habit and received the name Sister Mary Daniel when she entered the novitiate in April, 1950.

After leaving the novitiate, Sister Mary Daniel served in the office area of Saint Francis Hospital in Crookston where she remained through the first half of 1954.

In August, 1954, after making final profession, she was assigned to teach at Cathedral School in Crookston for one year, and then to teach sixth grade at Assumption School in Barnesville. From 1957 to 1963, she was the principal at the school as well as the superior in the convent. In the summer of 1963, she returned to the College of Saint Catherine to complete a degree in business education. Her preference would have been to teach business education, but she was assigned to the Mount business office where she worked under the mentorship of Sister Carol Jean Schroeder.

Sister Mary Daniel attended Saint Louis University where she earned a master’s degree in hospital administration, after which she returned to the Mount business office, but this time as the treasurer of the monastic community while serving on the boards of all four hospitals staffed by the sisters.

On July 1, 1983, she became director of Health Services a Mount Saint Benedict Monastery. For the next twenty years she saw to the good care of the sick, the aging and the frail members of the community. During this time she found great joy in living at Marymount Farm on the Mount property.

In 2003, Good Shepherd Hall as the infirmary was converted into an assisted living facility under the management of Villa Saint Vincent. From the time of her “retirement” on July 1, 2003, to August 1, 2005, she served the community by keeping the health care inventory records, attending all the care plan meetings at the Villa for the sisters in residence there, maintaining health care records for all the sisters, serving as a sister-companion for one of the sisters who was in a nursing facility in Fertile, assisting in the Mount archives and organizing and overseeing the printing of 9,000 copies of the Crookston Benedictine publication three times a year.

In May, 2005, she was asked by newly-elected prioress, Sister Lenore Paschke, to become her secretary in addition to representing the prioress in the care-plan meetings for the sisters living at the Villa. She also worked in coordinating the care of the sisters at the Villa and those who lived in Good Shepherd Hall at the Mount. In April, 2013, she retired from her position as secretary to the prioress.

Sister Mary Daniel spent the ensuing years caring for her health and strengthening her attention to living monastic life.

Sister Mary Daniel wrote, “I am at my best when I can serve community members rather than in outreach positions. Living directly under this roof and hearing Saint Benedict say to me from time to time LISTEN! has given a monastic rhythm of work and prayer to my life. . . . I am grateful that Benedict’s invitation has brought my spiritual life to a point of listening through lectio divina, Benedict’s way of praying scripture.”

Sister Mary Daniel was preceded in death by her parents Ernest and Bernadette Neumann and her siblings Joseph, Alfred, James, Thomas, Francis, Ernest, Helen, Angela, Phyllis and Gabriel. She is survived her sister Peachy, many nieces and nephews and the Sisters of Saint Benedict of Crookston.

Gifts in memory of Sister Mary Daniel may be given to Mount Saint Benedict Foundation.

To order memorial trees or send flowers to the family in memory of Sister Mary Neumann, please visit our flower store.