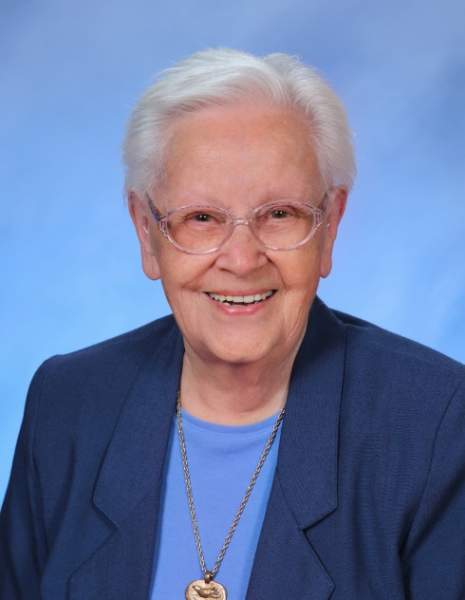 Sister Mary Jean was born on September 15, 1927, the third child of George and Julia Gust of rural East Grand Forks, Minnesota.  She said that her childhood days were filled with peace. She loved school and loved to read. She also enjoyed weeding in the family garden, though not neglecting household chores.  Sundays were special days of going to church and visiting with grandparents.

When sisters came to her family’s home asking for donations, they often brought a pail of Mount honey and one time brought small rosaries for the children.  Mary Jean and her elder sister Margaret had the good fortune of attending high school at Sacred Heart in East Grand Forks and grew to love their teachers, the Benedictine sisters.  They appreciated the dedication and interest that they had for each student.  In 1946 Mary Jean was inspired to take steps to begin her life as a Sister of Saint Benedict, together with her older sister, Margaret.

Mary Jean and Margaret entered the community on June 24, 1946. They entered the novitiate and were invested with the Benedictine habit on March 19, 1947, when they got their religious names. Mary Jean received the name Sister Ameliana, and Margaret became Sister Cornelia. Sister Ameliana later returned to her baptismal name, Sister Mary Jean. During her first years in the novitiate and juniorate, she grew in understanding the Divine Office and the monastic life. She didn’t really understand what meditation was about but she did her best to practice it, even though she might fall asleep during the meditation period which she admitted was the Lord’s way of showing her she needed more rest.

Her education prepared her for teaching and administration of schools.  After eighteen years of teaching, she became the principal at Sacred Heart Grade School, working with parents and students in a loving and supportive way.  In 1978 Sister Mary Jean began serving as Director of Schools and Religious Education for the Diocese of Crookston. Under the leadership of Bishop Victor Balke, she served in that capacity for eight years. She put on thousands of miles visiting parochial schools in the rural Crookston Diocese. As such, she developed close relationships with numerous people across the far-flung diocese.  She also served in the same capacity in the Fargo Diocesan Office and developed relationships there also.

A special opportunity presented itself when she was able to accompany Sister Karen Violette to Belgium to help a group of contemplative semi-cloistered Benedictine Sisters in their retreat and outreach programs. The year she spent there was blessed with spiritual and physical renewal.

When she returned from Belgium she began work at the Cathedral parish in Crookston, on staff with Deacon Denny Bivens, who introduced her to the parish needs and programs. The pastor at that time, Monsignor Roger Grundhaus, asked if she would consider going to Fertile to be a pastoral presence to the people in the parish and community and to assist him with his parish responsibilities.  Sister Mary Jean was a presence not only to Catholics but to the entire community which is predominantly non-Catholic. After many years at Saint Joseph Church in Fertile, she realized that she needed to retire and return to the Mount in 2016 to tend to her failing health and live a more relaxed Benedictine monastic life.

Sister Mary Jean is preceded in death by her parents, George and Julia Gust, brothers Joseph, Robert, and Gerard and sister Sister Cornelia Gust and sisters-in-law Rosemary, Alice and Risong. She is survived by sister Betty Ann (Burnell) Skelton, brothers Timothy and Philip (Zenaida), sisters-in-law Susan and June Gust, many nieces and nephews and her Benedictine community.

Gifts in memory of Sister May Jean may be given to Mount Saint Benedict Foundation.

To order memorial trees or send flowers to the family in memory of Sister Mary Gust, please visit our flower store.