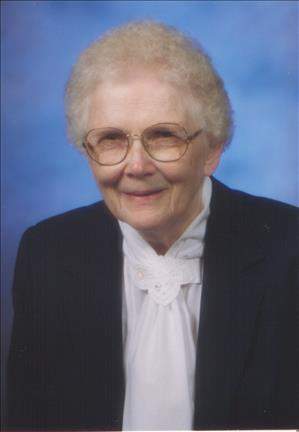 Sister Mary Fay, 93, died October 11, 2016 at Villa Saint Vincent in Crookston, MN. Sister Mary was born February 27, 1923, in Moorhead where her family was among the early settlers in the area. Mary was the second of four children of James and Emma (Thedens) Fay. She attended Saint Joseph's School in Moorhead where she was taught by the Benedictine Sisters from Crookston. In the second grade she set her heart on being a sister like her teachers. Sister Mary said that as she "grew in age and foolishness" she decided she did not want to be a sister. Her eighth grade teacher said to her, "Well, I think you have a religious vocation." Sister Mary was not entirely convinced, and she said that she was dismayed and she told Jesus, "If you want me to become a sister, I will – someday. But for now, I'm going to have all the fun I can." Before long she began to feel excited about the prospect of becoming a sister. When she mentioned to her parents that she was leaning toward entering the monastery they allowed her to attend Mount Saint Benedict Academy. While in high school she became excited and looked forward to giving herself completely to God as a sister of Saint Benedict. When she was invested as a novice she received the name, Sister Pius (she later resumed her baptismal name – Mary). She made her first profession of obedience, stability in the community and fidelity to the monastic way of life in 1941 and her final profession in 1944. Her first assignment was to the teaching ministry which ended in critical illness. By the time she recuperated, plans for building Saint Francis Hospital in Crookston were in progress and nurses were needed. She received nurses' training and then served for 45 years in health care institutions sponsored and staffed by the community.—in emergency rooms, laboratories, obstetrical floors, x-ray and medical records departments. She claims she did what she would never have done on her own initiative. Sister Mary served at Saint Mary's Hospital in Detroit Lakes, Saint John's Hospital in Browerville, Saint Vincent's Rest Home and Villa Saint Vincent in Crookston. Then Sister Mary was asked to serve in the archives of Mount Saint Benedict Monastery. During this time she wrote the community history: A Time for Remembering, published in 1994. She described her experience of community as living and working with Benedictine sisters – "very ordinary women, seeking to love and serve God together through prayer and service." In 1998, she wrote that her years as archivist at the Mount gave her the opportunity to enrich her monastic life through prayer, interpersonal relationships, and meaningful work, thereby fulfilling the dreams of her youth. Sister Mary is preceded in death by her parents James and Emma Fay, her brothers William and James and her sister-in-law, Elizabeth. She is survived by her sister Margaret Olich from Aptos, CA, her sister-in-law Beverly Fay of Moorhead, many nieces and nephews and the Sisters of Saint Benedict of Crookston. Reception of the body of Sister Mary will be on Monday, October 17 at 4:30, p.m. with a prayer service at 7:00 p.m. The funeral will be at 11:00 a.m. on Tuesday, October 18. All services will be at Mount Saint Benedict Monastery, 620 Summit Ave., Crookston, MN, phone 218-281-3441.

To order memorial trees or send flowers to the family in memory of Sister Mary Fay, please visit our flower store.