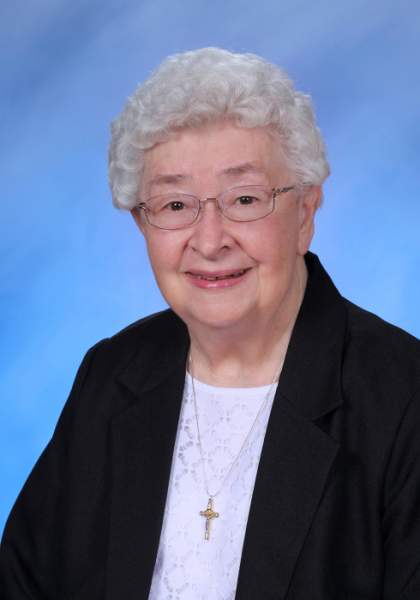 Sister Lucille Schafer died Thursday, January 17th at Villa St. Vincent Nursing Home in Crookston.  A Mass of Christian Burial will be Friday, January 25th at 11am at the Chapel at the Mount with The Very Rev. Vincent Miller presiding.  Visitation will be held Thursday from 5:00 pm to 7:00 pm in the Chapel. Burial will take place in Mt St. Benedict Cemetery in the Spring of 2019.

Lucille Schafer, daughter of Rose (Kuld) Schafer and George Schafer came into this world on December 20, 1930. She was the third of four children, two brothers: Raymond and John and a sister, Sister Yvonne. Sister Lucille said that one of the things she was most grateful for was the Catholic faith passed on to her by her parents.

Lucille joined the Sisters of Saint Benedict of Crookston on January 2, 1948. She made her temporary monastic profession on July 5, 1949 and her final profession on July 11, 1952. Sister Lucille taught in elementary schools in Crookston, East Grand Forks, Red Lake Falls, Benson, Mahnomen, and Detroit Lakes. She also taught in a catechetical school in Slayton. She served as principal in Red Lake Falls, Mahnomen and Detroit Lakes. Later she served as pastoral associate in Red Lake Falls, and as a foster grandparent in Thief River Falls where she also served as a safe environment worker for Saint Bernard Parish.

Sister Lucille was known for her quiet, gentle ways. She declared that even if she had not entered the monastic community, she would have been a teacher. Sister Lucille wrote, “Throughout the years I sought and found my way of seeking God in living and praying in community with the Sisters of Saint Benedict. I further tried to pursue God’s call through my ministry of working with people and parishes and schools. Years of true fulfillment were found in teaching, administration, serving as pastoral associate and in tutoring students. ‘I served as a parish pastoral minister and as a school tutor in the Foster Grandparent Program. Opportunities to travel to Rome, Medjugorje and Croatia were added occasions for spiritual and cultural enrichment. ‘Now it is with a grateful heart that I glance back over the past years observing all the favors God has extended to me.”

Sister Lucille was preceded in death by her parents and her siblings. She is survived by many nieces and nephews and by the Sisters of Saint Benedict.

Gifts in memory of Sister Lucille may be given to Mount Saint Benedict Foundation.

To order memorial trees or send flowers to the family in memory of Sister Lucille Schafer, please visit our flower store.