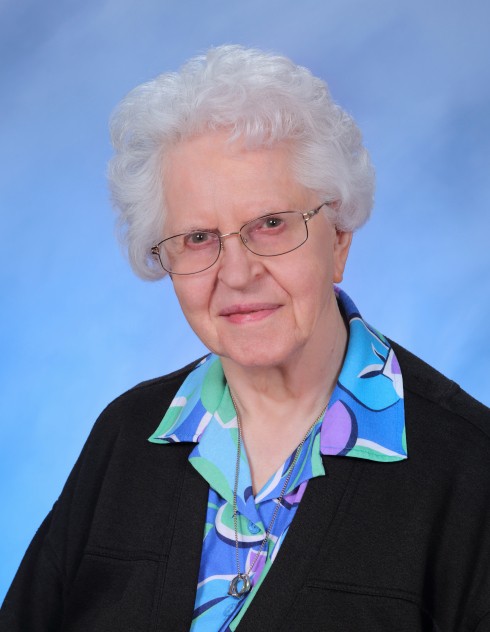 Mary Jane Phyllis Lasha was born in Red Lake Falls, MN, the last of five children born to Emery and Josephine (Morin) Lasha. When Phyllis was just a few months old, her parents moved to a farm near Red Lake Falls. She attended country school for seven years. When she was ready for eighth grade, her parents returned to Red Lake Falls, where she attended Saint Joseph School. She went two years at Lafayette High School before transferring to Mount Saint Benedict Academy in Crookston for her junior year.

During those two final years of high school, Phyllis was attracted to the Sisters of Saint Benedict and asked to join the community in 1946. Given the name of Sister Laurian when she entered the novitiate, she made her final profession in July 1951.

Sister Laurian earned a Bachelor of Arts degree in mathematics from the College of Saint Benedict in St. Joseph, MN and a master’s degree in library science from the University of Minnesota in Minneapolis. In her early religious life, she had attended the Diocesan Teachers College in Saint Paul and had taken summer extension courses from the College of Saint Teresa, Winona, MN.

Sister Laurian's teaching career began in Rosen, MN, followed by years in Moorhead, Detroit Lakes, Osseo, Barnesville, Crookston, and Red Lake Falls. She served as principal in Rosen, Cathedral Elementary in Crookston and Red Lake Falls. After earning her degree in library of science, she served as the librarian in Sacred Heart High School in East Grand Forks. During those years, she also taught algebra and journalism. She spent many years teaching summer vacation school as well as two summers with the migrant program and one as a nurses’ aide in Detroit Lakes.

In 1987 Sister Laurian began working in the public library in Crookston and became director of the library ten years preceding her retirement in 2000. She always said she didn't retire; she just changed jobs. Among the jobs she had while residing at Mount Saint Benedict Monastery was coordinating the meetings of a local peace group (Pax Christi), working as a receptionist, and maintaining the monastery archives. These were all assignments that she enjoyed.

Sister Laurian will be remembered for her unwavering commitment to her community, her passion for peace work, and her extraordinary attention to detail. Who else has the name of every student she has ever taught?

Preceding Sister Laurian in death were her parents, two sisters and two brothers and their spouses: Noella (Lawrence) Audette, Robert (Lorena) Lasha, Clement (Bernice) Lasha, and Doris (Leonard) Goulet. She is survived by several nieces and nephews, other relatives, and the members of her religious community.

Memorials in honor of Sister Laurian Lasha may be given to Mount Saint Benedict Foundation.

To order memorial trees or send flowers to the family in memory of Sister Laurian Lasha, please visit our flower store.