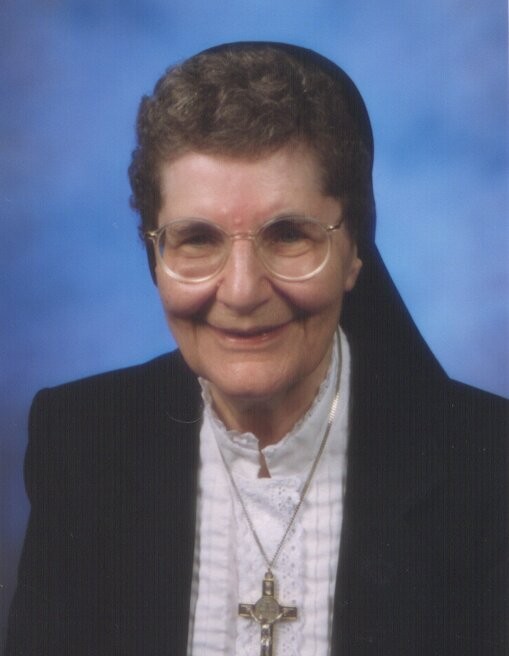 Sister Joan LaCoursiere was born in Terrebonne to Paul and Sophie (Violette) LaCoursiere in a family of two brothers and five sisters. Sister Joan grew up in a family steeped in French-Canadian culture and the Catholic faith. Sister Joan learned manual labor on the family farm, especially as a shepherdess with her sister, Elma.

She followed her sister, Sister Cuthbert, into the monastic community at Mount Saint Benedict. When she received the Benedictine habit as a novice, she became known as Sister Hiltrudis. Later, when the sisters returned to their baptismal names she took the name “Sister Joan.”

After her novitiate Sister Joan was assigned to be a teacher. She taught in Mahnomen, Lefor, ND, Crookston, and East Grand Forks. In Crookston, she was the principal at the Cathedral and the assistant principal at Mount Saint Benedict High School, and in East Grand Forks, she was the principal at Sacred Heart High School. Students loved Sister Joan, and she conveyed, “One of the joys of teaching is to have students return to visit and express appreciation.”

After many years in education, Sister Joan undertook another ministry –pastoral coordinator in Fertile and Mentor, MN. She enjoyed teaching scripture, visiting homes, counseling, and providing spiritual direction to those who asked for it.

As prioress of the community, Sister Joan faced many challenges, including diminishing membership and closing some ministries. Nevertheless, she drew from prayer the strength to make peaceful and patient responses to people and events she encountered. She is remembered affectionately by her sisters as having supported them through this period and encouraging new life in the community.

When her term ended, Sister Joan went to work at Care and Share, a homeless shelter where she taught scripture and established the Adult Learning Center. After retiring from this ministry, Sister Joan became the pastoral care coordinator for aging sisters at the Mount. When Sister Joan left this ministry, she became the guest mistress for the Mount. Eventually, she moved to the Summit and the Villa, a long-term care facility.

Sister Joan shared, “As I reflect on my monastic life, I believe that I am most grateful to God and the Community for the opportunities I’ve been given to grow in my monastic life, not only educationally, but most of all spiritually.” Sister Joan was loved and respected by the Sisters of Saint Benedict.

“The sister who most influenced my life is Sister Marcella. . . (who) found in me talents and potential for growth which I never knew existed.”

Sister Joan wrote, “The Gospel text which appeals to me is Mark 4:45-51--- The Storm at Sea. No matter what storms come into my life, I need only to go to Him. . . and He will always take time to listen, and above all bring me His PEACE.”

Sister Joan’s deepest desire was to “give my all to the community as long as I can and to be able to say at the end of my life with Saint Paul:‘I have run the race! I have kept the faith!’ Now I am awaiting eternal happiness with God and his angels and saints.”

Sister Joan is preceded in death by her parents, Paul Joseph and Sophie Marie Violette LaCoursiere, and siblings: Sister Cuthbert, Emery, Viola, Lorena, Elma Mildred, Victor, and Beulah LaCoursiere. She is survived by many nieces and nephews, her care companion, Sister Karen Violette, and the Sisters of Saint Benedict, Crookston.

The private Mass of Christian Burial celebrating Sister Joan’s life will be held on Thursday, February 3, 2022, at 2:00, p.m. in Sacred Heart Chapel at Mount Saint Benedict Monastery with Bishop Andrew Cozzens presiding and the Very Reverend Timothy McGee as homilist. The funeral will be livestreamed by going to Sister Joan’s obituary page at www.stenshoelhouske.com and clicking on the prompt to watch.

Gifts in memory of Sister Joan may be given to Mount Saint Benedict Foundation.

To order memorial trees or send flowers to the family in memory of Sister Joan LaCoursiere, please visit our flower store.