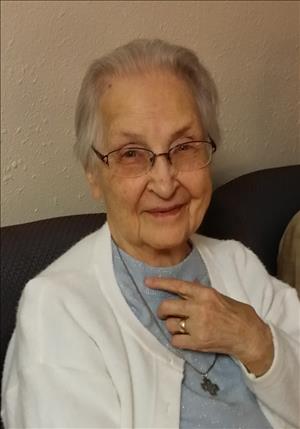 Sister Irene Lemire, CSJ, died peacefully at Villa St. Vincent in Crookston, Minnesota on September 12, 2016. Irene Louise Lemire was born on January 16, 1923 in Somerset, Wisconsin to Gasper and Rosa Lemire. She was the sixth child in a family of nine all of whom had a lively spirit and filled their French-Canadian home with laughter and fun. After finishing 8th grade in Somerset, Irene attended St. Joseph's Academy in Crookston; during that time she requested to enter the Sisters of St. Joseph of Bourg, France and was accepted in 1938. Having been given the religious name of Sister Rose Marie, Irene and 3 companions traveled to Bourg, France in 1939 for their religious training. Due to the outbreak of World War II, all 4 sisters were "stranded" there for 7 years. Sister Irene returned to the United States in February 1946 and served as homemaker in communities of the Sisters of St. Joseph in Crookston, Kilkenny, Stewart and Minneapolis, Minnesota, Superior, Wisconsin, and Rainy River, Ontario, Canada. Between 1962 and 1970, Sister Irene was the receptionist at St. Joseph's Academy and also served as house mother to the Spanish-speaking girls from Mexico who attended SJA to learn English. Care for the sick and elderly became Sister Irene's next mission after she completed a nurse aide course in New Richmond, Wisconsin. She ministered as a nurse aide at San Haven State Sanatorium in Dunseith, North Dakota, St. Joseph's Hospital in Park Rapids, Minnesota and for Hubbard County until 2004. Sister Irene became a resident of the Summit Assisted Living Apartments in Crookston in 2004. In May 2015 she moved to the Villa St. Vincent due to declining health. Surviving relatives of Sister Irene include sister-in-law Marlyn Lemire of Somerset, Wisconsin and many nieces, nephews, grandnieces and grandnephews. Sister Irene is also survived by the members of her community, the Congregation of St. Joseph. Preceding her in death include parents Gasper and Rosa (Campeau) Lemire; brothers Edward, Andy, Maurice, Ben and Duane; sisters Doris (Campeau), Ella (Frandson) and Betty Ann (Neumann). Services for Sister Irene Lemire will be held on Friday, September 16, 2016 at the Villa St. Vincent Chapel in Crookston. A Wake Service will be held at 1:00pm; the Mass of Resurrection will be celebrated at 2:00pm. Interment will be in the Lemire family plot in St. Anne's Cemetery in Somerset, Wisconsin at a later date.

Prayer service at 1PM and visitation until the time of the funeral.

To order memorial trees or send flowers to the family in memory of Sister Irene Lemire, please visit our flower store.