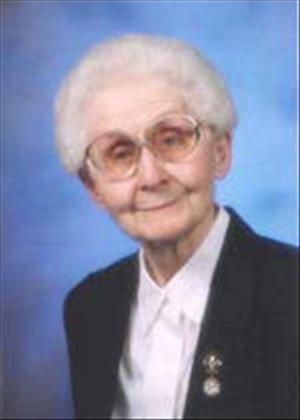 Cecelia came naturally to a love of music, as her father played the violin and the family sang songs of the day in three and four part harmony while milking the cows. At Mount Saint Benedict Academy, Cecilia's love of music and the arts flourished. At the age of ten, she felt drawn to religious life at Mount Saint Benedict, where her older sister, Sister Anne, was already a member. Cecelia became a postulant in September of 1932, received the name Sister Florentine as a novice in 1933, and shortly after while in temporary commitment, was assigned to assist Sr. Gertrude Knopke, the music instructor at Assumption Convent in Barnesville, Minnesota. Sister Florentine made Final Vows in 1937. She continued as an educator and music teacher in other parishes of Red Lake Falls, Mahnomen, Lefor in North Dakota, Crookston, and Mahtomedi. While at Mahtomedi, she received a Bachelor of Arts from the College of St. Catherine with a major in music. Other professional preparation was at Mount Marty College, Yankton, SD, Wisconsin State University in Madison, and Columbia University in New York City. It was also while in Mahtomedi that Sister Florentine recognized the amount of talented artists and musicians in the White Bear Lake Area. Because of this she organized a meeting of

several people that became the beginnings of the White Bear Lake Arts Council. Today, now named the White Bear Lake Center for the Arts, it continues to provide a gateway to diverse arts experiences. As early as 1953, Sister Florentine realized that she was having difficulty hearing. By 1963, she realized that her impairment would necessitate a change in ministries. In 1975, she pursued and was accepted at the Graduate School of Counseling at Gallaudet University in Washington, D.C., where she successfully completed a course in CUED speech. When Sister Florentine returned to Minnesota, she joined the staff of Shekeda Hearing, Inc. in White Bear Lake, providing audiological services especially to long-term care facilities, group homes, and industrial hearing conservation programs. She also participated in the Peer counseling Program developed by the University of Minnesota. While aiding seniors with hearing disabilities, Sister Florentine also served as their friend, confidant, and advocate for needs that were otherwise unmet, especially those needs involving legislation and compliance with existing laws. She appeared on TV Channel 5 Eyewitness News in Minneapolis as the Health Expert of the Day. In 1992, the Minnesota Foundation for Better Hearing and Speech recognized Sister Florentine for her dedication to improving the lives of older Minnesotans by presenting its Professional Service Award to her. In addition to her work with the hearing impaired, Sister Florentine was very active in the parish of St. Louis the King in St. Paul. In a farewell tribute in 1994, the pastor cited her keen appreciation for the liturgy as the obvious font of her faith-filled life of commitment to God, to her Benedictine community, and to the Church at large. In August of 1994, Sister resided in Olso to aid the pastoral administrator. She returned to the monastery in 1995, where she helped her community members and others in the Crookston community with hearing loss. Sister Florentine was preceded in death by her parents, her sisters, Sr. Anne and Caroline (Goulet) Brunelle, and her brother, Leonard. She is survived by nieces and nephews, friends, and the members of her monastic community. Mass of Christian Burial will be held at 11:00 a.m., Monday, April 13, 2015, at the Mount Saint Benedict Monastery in Crookston, with Msgr. Roger Grundhaus, presiding. Visitation will be on Sunday from 5-7:00 p.m., with a 7:00 p.m. prayer service, and also for one hour prior to the funeral. Online registry:

To order memorial trees or send flowers to the family in memory of Sister Florentine Goulet, please visit our flower store.