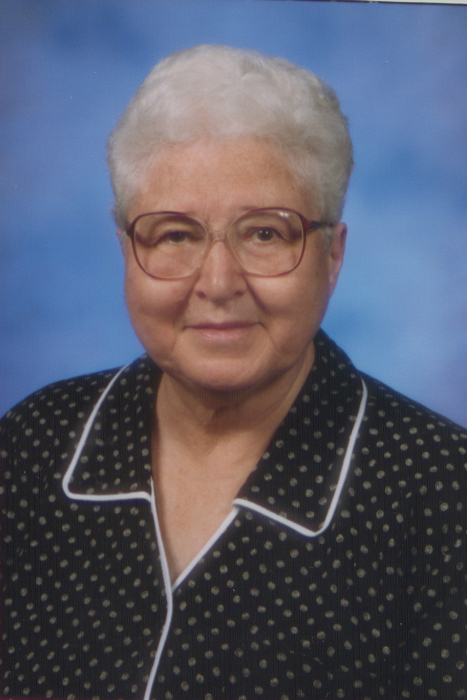 Dolores Norman, the daughter of Neil and Mary Agnes (Langdon) Norman, was born March 1, 1926, in East Grand Forks. She graduated from Grand Forks Central High School in 1944. She attended the College of Saint Benedict in Saint Joseph for her freshman year. “This first year in residence at Saint Benedict’s,” she said, “was an unforgettable experience. The liberal arts framework in that freshman year fostered a love for learning that still impacts my life on a daily basis.”

She then entered Mount Saint Benedict Monastery and was given the name Sister Paul when she became a novice.  (She later went back to her baptismal name.) Sister Dolores made her first monastic profession on March 16, 1947, and her final profession in 1950.

Teacher preparation began in 1948 when she attended the Saint Paul Archdiocesan Teachers’ College. This was followed by teaching assignments in Rosen, Osseo, and Crookston.

Her formal education continued at the College of Saint Teresa in Winona, Catholic University in Washington, D.C. and Saint Louis University, MO. She majored in history and political science, and received BA, MA, and Ph.D. degrees.

While teaching history and French at Mount Saint Benedict Academy, Sister Dolores was selected as a team member of Project Bridge, a program funded by the Ford Foundation and designed to improve race relations in Cleveland, OH. Sister Dolores was part of a team teaching an Urban History course at Saint John’s College.

Sister Dolores was involved in the Neighborhood Project, a Saint Louis University Literacy Program. Later she taught reading to adults in the Indian Studies Program, and Ojibway history to American Indian inmates at the Saint Cloud State Reformatory. This included advocacy letter writing in support of women and children and led to a position as Professor of History at Bemidji State University.

During her professional life Sister Dolores was involved in various organizations and received many awards and grants. Among them was the opportunity to study at the University of Paris in France under a Fulbright Scholarship award. She was listed in the Directory of American Scholars and was honored with a faculty award as Teacher of the Year. She received annual recognition by the Indian Studies Department at Bemidji State University. An award dear to her heart was the 1997 Bucky Award designating her as fan of the year in support of the Bemidji State University’s Men’s Hockey team. In October, 2009, the Northwest Minnesota Women’s Fund honored her as an Outstanding Community Builder.

Sister Dolores taught twenty-five years of Bemidji State University and retired in 1993 as Professor of History with emerita status. Sister Dolores had a life-long love of learning and found her many travels to Europe and Canada life-expanding. She especially enjoyed her visits to national libraries in the United States, Canada, France and England.

After her retirement, for ten years she was a teacher helper at Sunrise Center for Families and Children in Crookston.

In her words, “I spent all of my life teaching and it has been a memorable experience for me to have taught at all levels:  elementary, high school, university and adult education.” In respect to the past sixty years, Sister Dolores said, “Moves in one’s life are a road map. In my experience happenings were good ones. . . . There have been few unexpected turns and a constancy of beliefs, few defeats, no intense sufferings, and no big changes except societal or ecclesiastical ones. The progression from convent to convent or from university dorm to university dorm has caused me to take stock. Many times, I’ve had to decide what to leave and what to take during the search for the sacred.” She continued, “The strength and support of the community have meant the most to me.”

She is survived by many nieces and nephews and the Sisters of Saint Benedict.

Gifts in memory of Sister Dolores may be given to Mount Saint Benedict Foundation.

To order memorial trees or send flowers to the family in memory of Sister Dolores Norman, please visit our flower store.