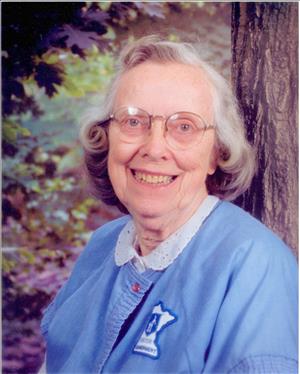 Ione Anne Suedbeck made her first appearance in rural Adrian, Minnesota, the fifth of seven children born to Frank and Mary (Schutz) Suedbeck. She attended rural schools in the Adrian vicinity and a public school in Slayton, Minnesota. After high school, she worked on the family farm, a bookkeeper at a produce, billing typist at a wholesale plant and as the bookkeeper at the Murray County Oil Coop. After becoming acquainted with the Crookston Benedictines who taught at a catechetical school in Slayton, Ione entered Mount Saint Benedict in 1951 where she became known as Sister Constance. Sister Constance attended summer school sessions pertaining to primary education at Mount Saint Benedict, Marillac College in Saint Louis, the College of Saint Scholastica in Duluth, and she graduated from the University of Mary in Bismarck, ND. Praying the Liturgy of the Hours, attending daily Eucharist and singing in the Mount choir were very important to Sister Constance. Her first love was working with little children, and doing manual labor was a close second. Energetic, with her tall, gaunt frame, she spent her strength and all the time she could spare in the gardens and with fresh vegetables. During the growing seasons, this ministry claimed most of her time and attention. In addition to education and gardening, her ministries were wide and varied: as dietary supervisor at Saint Francis Hospital in Crookston, laundry supervisor at Saint Mary's Hospital, Detroit Lakes, convent housekeeper and cook at Saint Elizabeth School in Lefor, North Dakota, a nurse aide at Villa Saint Vincent, a home health aide in Fargo, bookkeeper at Care and Share Center in Crookston and as a volunteer at the Crookston Public Library. Sister Constance will be remembered by many who were blessed to have her as a creative teacher at Saint Joseph School, Moorhead, Cathedral Elementary School, Crookston and Assumption School, Barnesville. Sister Constance also taught religious education classes at Carrizo Springs, TX and helped in the summer program in Moorhead for children of migrant farm workers. After joining the Crookston Foster Grandparent Program in 1989, she served at Highland Middle School, Rainbow Village Day Care and Lincoln School. Sister Constance expressed her love of these years when she wrote, "I love working with little children. They are so open and appreciative." Sister Constance quoted her Foster Grandparent Director as saying: "Each of us is like a tea bag. We don't realize our strength until we get into hot water." Sister Constance was seldom out of hot water. She believed every person's primary duty was to stay healthy by eating a healthy diet—including garlic, onions, vinegar and spinach. She preached this belief to anyone who would listen. This is what got her into hot water much of the time. When her health began to fail, she became a resident in assisted living at Mount Saint Benedict Monastery in 2003, but continued to enjoy working in the garden as her strength permitted. In 2016, she moved to Villa Saint Vincent. Sister Constance was preceded in death by her parents, her sisters Esther Johnson, Raphie Vande Velde, Florence Disch, Lollie Engebretson and Elvira Dommeyer and a brother, Archibald. She is survived by many nieces and nephews and the members of Mount Saint Benedict Monastery.

visitation will be held one hour prior to service

To order memorial trees or send flowers to the family in memory of Sister Constance Suedbeck, please visit our flower store.