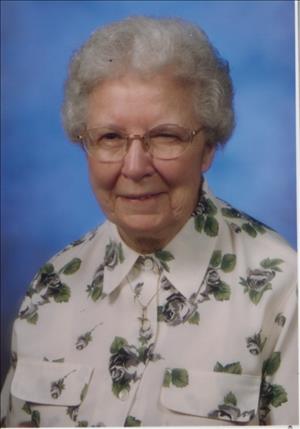 Sister Cecilia Smith, 95, died at RiverView Hospital, Crookston, on Saturday, July 16, 2016. Mary Cecilia Smith entered this world on May 8, 1921 in Devil's Lake, ND, the first of eleven children of Pearl and Alex Smith. Her mother's father, Fred Lang came from Germany and married a young French and Indian woman. Her father's parents were Metis (French and Chippewa) from Canada. So, Mary Cecilia's heritage was German, Sioux, French and Chippewa. Mary Cecilia grew up near Saint Michael, ND where she also attended elementary school. She credits her interest in becoming a sister to the Grey Nuns who taught elementary school in Saint Michael. She recalled that she wanted to become a Gray Nun but Father Damian Priske, OSB brought her to the Mount and it was there that she entered in August, 1937. She became a novice in 1938 and was invested in the Benedictine habit and received the name Sister Damian (Later she went back to her baptismal name of Cecilia). She made first monastic profession in 1942 and final profession in 1945. Sister Cecilia taught in elementary schools in the Crookston Diocese in Red Lake Falls, East Grand Forks, Barnesville, Bemidji, and Crookston. In addition to that she taught in Lefor, ND and Asherton, TX, mostly in primary grades. She had a great impact on her students, many of whom remained friends throughout her life. Sister Cecilia received a Bachelor of Science degree from Viterbo College in La Crosse, WI. Sister Cecilia's love of learning did not stop with the degree from Viterbo College. She continued to enroll and participate in scripture, theology and spirituality classes. In 1995 she began taking care of her mother. She wrote, "My experience there was very different from being at the Mount or on mission. I was responsible for everything, house work, cooking, ironing, outdoor work… I also took care of our spiritual life such as saying our daily rosary, reciting the office, going to Mass on Saturday evening or Sunday." While her mother was in a long-term facility in Devils Lake, Sister Cecilia lived with the Mercy Sisters. During the time she visited her mother daily, she was asked to visit the Catholic residents. She was soon asked also to bring them communion. After the death of her mother, Sister Cecilia returned to the Mount where she volunteered at the reception desk and used her embroidery skills in creating sets of dishtowels depicting each day of the week. She had difficulty keeping up with requests for her dishtowels. Sister Cecilia was always neatly dressed. She was gracious to all guests. To the very end Sister Cecilia searched for ways to be helpful whether it be carrying a dinner tray or some other task that made life more pleasant for others. Work, prayer, holy reading and hospitality were well-established in Sister Cecilia's life. Sister Cecilia is preceded in death by her parents, and her brothers Ambrose, Francis, Edward and Howard. She is survived by her sisters Delia Markland of Tacoma, WA, Alice Kimmerly of Sheyenne, ND, Winifred Bartlett of Tacoma, WA, and Julie Graham of Manchester, WA, brothers Larry of Federal Way, WA, and Alfred of Devils lake, ND, many nieces and nephews and her monastic community, the Sisters of Saint Benedict. Reception of the body of Sister Cecilia will be at 4:30, p.m. Sunday, July 24 with visitation from 5:00 until the wake service at 7:00 p.m. The Mass of Christian Burial will be at 11:00 Monday, July 25. All services will be at Sacred Heart Chapel, Mount Saint Benedict Monastery, 620 Summit Ave., Crookston, MN. Memorials in honor of Sister Cecilia may be given to Mount Saint Benedict Foundation, 620 Summit Avenue, Crookston, MN. 56716.

Visitation for the hour prior to the Mass.

To order memorial trees or send flowers to the family in memory of Sister Cecilia Smith, please visit our flower store.