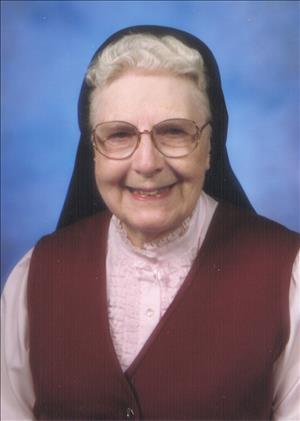 Sister Brigetta (Mary Catherine) Buckley, 95, died Monday, October 31, 2016. Joseph and Mary Agnes (McPhillips) Buckley welcomed their sixth child, Mary Catherine, into their very musical, very Irish and very Catholic family on November 20, 1920. Though the family lived near Bagley, she was baptized in Our Lady of Perpetual Help Church (now known as Saint Mary's) in Fosston by Father F. J. Deschenes. As a cheerleader in Bagley Public High School she loved the uniform of a white satin blouse with long sleeves. She also loved swimming, ice skating, and playing baseball, basketball and horseshoe. She also took an interest in target shooting, and she became pretty good at it, too! Another interest was working at the punching bag! Her father often played the violin after supper. (The children would vie with each other in accompanying him to get out of doing the dishes!) Though her mother did not play the piano, she taught her children to play! The Catholic faith was important to the Buckley family. Since the family lived near the church, they often took responsibility for its upkeep –washing and ironing the linens, working with the choir, singing or playing the organ and participating in all church activities including organizing the summer vacation school. When the priest came to say Mass in Bagley he could count on a meal and accommodations with the Buckleys – they even had a room set aside for him! Mary Catherine had thought off and on about becoming a sister, especially in the wake of her sister Florence (Sister Carmella) joining the Benedictine community. She made the decision to enter the Sisters of Saint Benedict while attending a profession ceremony at the Mount. She spoke with Mother Monica Forkey, the prioress, and was told that she could enter on August 15, 1938. Her parents brought her to the Mount where she entered the Benedictine community. The only other person entering at the same time was a French-speaking girl from Quebec. In spite of the language differences, they became close friends, and when they were invested in the Benedictine habit they were given the names Sister Edith and Sister Brigetta. They, along with Sisters Ursula Karels, Eulalia Brophy, Joan LaCoursiere, Martina Wolfe and Marcelline Riske, made their final monastic profession on August 24, 1943. Sister Brigetta received a bachelor's degree from Clarke College in Dubuque, IA, and a master's degree from the University of North Dakota in Grand Forks. She was a well-loved teacher and principal in Catholic schools in Barnesville, Red Lake Falls and Moorhead. Students from fifty years ago still visited her regularly. Sister Brigetta also taught business education classes at Mount Saint Benedict Academy and served as dean of women for Corbett College. After these educational institutions closed, she became the secretary to the prioress. When asked about her greatest accomplishment, she responded, "I don't think I have done anything outstanding, but I hope I have influenced my students and associates in some small way by simply trying to lead a good religious life and by doing my work to the best of my ability." Sister Brigetta wrote glowingly of her parents and siblings, but of herself she says, "My life has been very ordinary." Those who knew her would say that she did everything extraordinarily well and would say it with gratitude, sincerity and love. Sister Brigetta was preceded in death by her parents Joseph and Mary Agnes Buckley, brothers: William Eugene, George, John and James and sisters: Patricia and Sister Carmella, OSB. She is survived by her sister Margaret Olich of Aptos, CA. many nieces and nephews and the Sisters of Saint Benedict. Arrangements for Sister Brigetta are: Reception of the body, Thursday, November 3, 2016 at 4:30 p.m., Visitation from 5:00 p.m. until the Wake service at 7:00 p.m. The Mass of Christian Burial will be on Friday, November 4 at 11:00 a.m. All services are at Mount Saint Benedict Monastery 620 Summit Ave., Crookston, MN, 56716. Memorials in honor of Sister Brigetta may be given to Mount Saint Benedict Foundation.

Visitation for one hour prior to the Mass.

To order memorial trees or send flowers to the family in memory of Sister Brigetta Buckley, please visit our flower store.