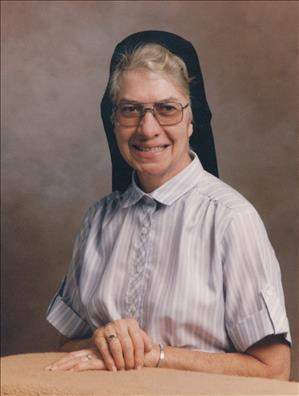 Bridget Durkin was born on February 5, 1932, in Ardoch, ND, to John and Martha (Lapinski) Durkin as one of their nine children. Bridget received her elementary education in a one-room country school in Walsh County, ND, and later she graduated from Mount Saint Benedict Academy. Bridget was baptized, received her first Eucharist and was confirmed in Saint John the Baptist Church in Ardoch. She remembered that she was confirmed by Bishop Aloisius Muench, later Cardinal Muench. Bridget was first inspired to becoming a sister by the Presentation Sisters who taught her for two weeks of summer religious education. She later considered the Maryknoll Sisters because she admired their work as missionaries, and she felt that she wanted serve God as they did. Eventually she became acquainted with the Benedictine Sisters from Mount Saint Benedict Monastery. She was attracted to both Mount Saint Benedict Academy and the monastic community by the friendliness of the students and the sisters. She wrote that she felt that all were treated as if each one was important. She was attracted by their "friendliness with each other, no cliques or class distinctions between rich and poor." She was drawn not only by the friendliness of the place but also because she felt that everywhere there "seemed to be music – everyone seemed to be singing – Mass, the conservatory, the girls' chorus, the chant of the sisters singing the Divine Office." Bridget entered Mount Saint Benedict Monastery on January 3, 1954, and was invested in the Benedictine habit on July 2, 1954, when she was received into the novitiate and was given the name Sister Romana. Later, she returned to her baptismal name of Bridget. She pronounced her temporary commitment as a Benedictine sister a year later. She made her final monastic profession on July 11, 1960. Sister Bridget received an Associate of Arts degree from Corbett College in Crookston. She generously shared her gifts in caring for the chapel at the Mount and in working in the garden. Her work in the garden was long and arduous, and marked by pride in the success of the garden in providing vegetables for Saint Vincent's Nursing Home, Saint Francis Hospital, Mount Saint Benedict Academy and the monastery plus many disadvantaged people. Her flower gardens yielded beautiful blooms for the chapel as well as other parts of the monastery. Her work as the sacristan was meticulous. The linens used on the altar were perfectly pressed; the utensils used for flower arrangements were cleaned and stored immaculately; candlesticks and candelabra never had a speck of dried wax on them. Sister Bridget had an artistic nature that was exhibited a multitude of ways but especially in gorgeous arrangements of flowers that adorned the altar. On the occasion of her twenty-fifth jubilee of monastic profession she was extremely proud to receive a message from Father Roger Schoenbechler, OSB, who wrote, "I am sending you a copy of my translation of The Book of Psalms. Kindly accept it with my compliments as a token of gratitude to you for the years of faithfulness you did in the sacristy at the Mount, providing daily for the Holy Sacrifice." Sister Bridget treasured this communication for the rest of her life. Sister Bridget celebrated her 60th jubilee of monastic profession on July 26, 2015. Sister Bridget's artistic gifts also manifested themselves in the creation of woodcarvings as a member of Valley Woodcarvers. When Sister Bridget was asked what the one thing she was most grateful for was, she said, "That I am a Benedictine Sister, especially in this community, Mount Saint Benedict." Sister Bridget was preceded in death by her parents and her brothers Theodore, Joseph and John, sisters Betty Staskivige, Vernie Drege and Helen Bearson. Sister Bridget is survived by her sisters, Evelyn (Walter) Paschke and Madonna (Lowell) Barsness, many nieces and nephews and the Sisters of Saint Benedict of Crookston. Reception of Sister Bridget's body will be at 4:30 p.m. on Wednesday, January 6, 2016 with visitation until the 7:00 p.m. prayer service. Sister Bridget's funeral will be at 11:00 a.m. on Thursday, January 7, 2016 with Msgr. Roger Grundhaus presiding. All services will be in Sacred Heart Chapel, Mount Saint Benedict Monastery, 620 Summit Ave. Crookston, MN.

To order memorial trees or send flowers to the family in memory of Sister Bridget Durkin, please visit our flower store.