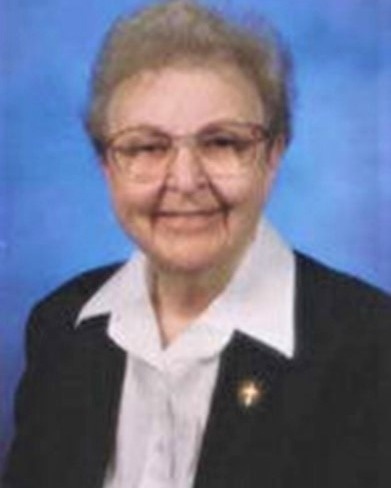 Lyda Martin was born in Oslo, Minnesota, on June 27, 1923. Her father, John J. Martin, of German descent, came from Canada; her mother, Laura Iverson, was of Norwegian descent. Lyda, the youngest of fourteen children, went to a country elementary school and then attended Oslo High School. She arrived at Mount Saint Benedict in 1943, received the name Sister Paschal as a novice, and made her final profession on July 17, 1947.

Sister Paschal received a bachelor’s degree from the University of Saint Catherine in Saint Paul. Later she did graduate work at Mount Angel in Oregon. Her fourteen years as an elementary teacher were spent at Thief River Falls, Moorhead, Rosen, Mahtomedi, East Grand Forks, and Benson. She also taught Religious Education classes and worked with the migrant summer school program doing catechetical work. She mentioned that she enjoyed working with liturgy and helping with junior and senior high school retreats.

In 1977, Sister Paschal was serving as Coordinator of Religious Education at Saint Catherine of Siena Parish in Seattle, WA, when Father Richard Stohr asked her to live in Matthew House, a new venture sponsored by the Knights of Columbus. Located next to the Washington State Reformatory, it became a safe, nurturing place where wives, girlfriends, and children could stay while finding more permanent accommodations.

The word about Matthew House spread swiftly among the inmates, and a steady stream of families arrived at all hours, looking for a meal and help to find a place to stay. Besides providing food, clothing, and child care, Sister Paschal became a sympathetic confidante to the women. It bothered her that inmates ate three square meals daily while many of their families went hungry. But, she said, “Whatever the prisoners have done, you can’t punish the children and women because their husbands have gotten into trouble.”

While focusing on nurturing inmates’ families, she counseled prisoners during a weekly Friday night visit in the prison chapel. She could offer only sympathy and common-sense advice, but the inmates appreciated her efforts. After years of ministering to prisoners and their families, she returned to Mount Saint Benedict due to failing eyesight. She moved to the Summit Apartments and then Villa Saint Vincent, a long-term care facility.

She is survived by many nieces and nephews and the Sisters of Saint Benedict of Crookston.

Sister Paschal will be remembered at a prayer service at 11:00 a.m., followed by the Mass of Christian Burial at 2:00 p.m. on Monday, September 19, 2022. Services will be at Sacred Heart Chapel at Mount Saint Benedict, 620 Summit Avenue, Crookston.

Gifts in honor of Sister Paschal may be given to Mount Saint Benedict Foundation, 620 Summit Ave., Crookston, MN 56716.

The Mass will be livestreamed from www.stenshoelhouske.com .

To order memorial trees or send flowers to the family in memory of Sister Paschal Martin, please visit our flower store.