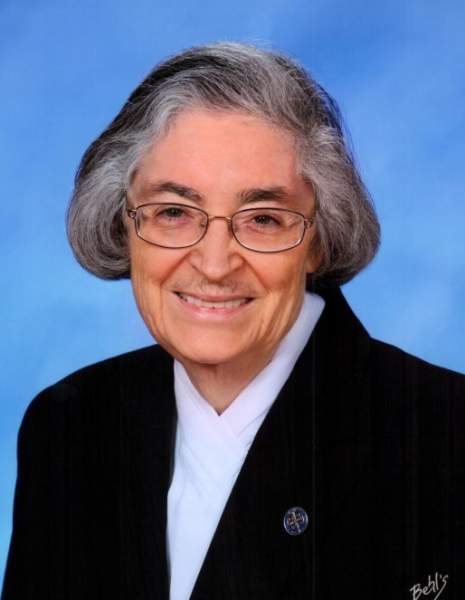 Sister Shawn Carruth, 77, Prioress of Mount Saint Benedict Monastery in Crookston, MN, died unexpectedly Thursday, March 26, 2020, at RiverView Health, where she was taken after suffering a stroke while in her room.

Mary Louise Carruth was the eldest of the three children of Frances (O’Leary) and Milton Carruth. She grew up in Benson, MN, where she attended Saint Francis School. It seems that the inclination to become a sister began early in Mary Louise’s life. When Mary Louise was a junior high school student, her pastor told her that she would become a sister.

Mary Louise attended Mount Saint Benedict Academy, and after graduation, she entered the Crookston Benedictines. A few months later, she received the Benedictine habit along with a new name, Sister Shawn.

Sister Shawn loved three things: studying, teaching, and being a member of the Sisters of Saint Benedict of Crookston.

Sister Shawn’s love of learning and language began at an early age when she taught herself Latin while she was still in junior high school! She was able to do this because the Mass was said in Latin, and the prayer books had Latin and the English translation. She learned vocabulary, conjugation of verbs, and uses of other parts of speech.

Sister Shawn worked as an active member of the Q Project, a reconstruction of a common written source used by the writers of the gospels of Matthew, Mark, and Luke. She served as the managing editor of several volumes that resulted from the study. Sister Shawn wrote not only on topics related to the New Testament but also on many related to monasticism. Sister Shawn said that she felt most like herself when she was studying for hours on end. Her scholarly articles can be found not only in volumes published in the United States but also in Australia.  Sister Shawn satisfied her love of language by learning French, Spanish, German, Greek, Hebrew, Aramaic, and Coptic.

Sister Shawn loved to teach. In her early years as a Benedictine sister, she taught in elementary schools in Bemidji, Red Lake Falls, and Mahtomedi. From 1972 to 1980, she taught French and religion at Mount Saint Benedict High School and also served as the director of ongoing formation for the monastic community. Before she even finished her dissertation, she accepted a teaching position at Concordia College in Moorhead, MN.

She taught in the religion department and also accompanied students on several study semesters abroad. Due to her acquaintance with international scholars, students were amazed at her acquaintance with people from other countries. She told the story of a trip to Europe when the plane had an overnight layover in Reykjavik, Iceland. Sister Shawn had a friend who lived in Reykjavik, and the students were astounded. She also told the story of being with a group of students in Rome and meeting one of her friends on the way to lunch at McDonald’s. The students asked her if she knew someone in every country of the world. When Sister Shawn left Concordia in 2013, she received the honor of Professor Emerita. Sister Shawn was a member of several honor societies, notably Pi Delta Phi (for French), Phi Beta Kappa, Kappa Gamma Pi (for graduates of women’s colleges). She also won several awards for teaching and scholarship.

In January 2016, Sister Shawn became the prioress of the Sisters of Saint Benedict in Crookston, Minnesota. Sister Shawn had said that she never wanted to be involved in administration, but now she was fully involved. During her tenure as prioress, Sister Shawn walked with many sisters through illness, and for some, to their final destination with God.

Sister Shawn is preceded in death by her parents Francis and Milton Carruth. She is survived by her sister Kathleen (Ron) Holtan, her brother Richard (Patty) Carruth and the members of her Benedictine family.

With restrictions in place to slow the spread of the corona virus, Mass of Christian Burial for Sister Shawn Carruth will be held Thursday, August 6, 2020, at 11:00am in the chapel at Mount St. Benedict Monastery. Attendance will be limited to Sister Shawn’s family, designated clergy, and the Sisters of Mount St. Benedict. A video of the Mass will be available for viewing on the Cathedral of the Immaculate Conception website  www.crookstoncathedral.com   Please remember Sister Shawn in your prayers.

To order memorial trees or send flowers to the family in memory of Sister Carruth, please visit our flower store.