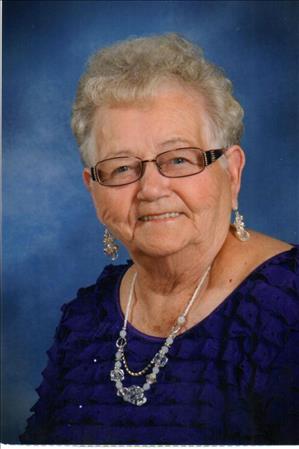 Signe Gladys (Olson) Boucher, 85, passed away very unexpectedly in New Orleans, LA on Thursday, September 15, 2016, while on a bus trip with her daughter, Peggy, and sister, Beverly. Gladys was born on November 10, 1930 (also her father's birthday) to Helmer and Margaret (Duffy) Olson in Baudette, MN and was raised in a two-bedroom log home. She was baptized and confirmed at the First Lutheran Church in Baudette where she was a devoted member, teaching Sunday school, singing in the choir, and active in the Luther League. As a child she loved spending time with her five siblings and spending time at her grandparents and uncles farms in Carp, MN. She attended Baudette High School and graduated in 1949. Gladys was very active in school, participating in choir, school plays, and was a cheerleader for 4 years. She loved to dance and attended dances weekly. After graduating she went to work for the Lake of the Woods Welfare office. Gladys later moved to Minneapolis and was employed at the Hennepin County Welfare office. She met her future husband, Robert Boucher, in Minneapolis, and moved to Crookston, transferring to the Polk County Welfare Office. Gladys and her 6 girlfriends from high school kept in touch for over 60 years with their round robin letter. She attended Baudette's school reunions every year to meet up with her friends. Gladys was united in marriage to Robert Boucher on August 27, 1955 at St. Anne's Church in Crookston. They briefly lived in Lowell Township where Robert and his brothers farmed. Shortly after, they built a home in Andover Township where they farmed and raised their 5 children: Tim, Tom, Mark, Peggy and Kristie. Gladys was a busy farm wife, cooking for the many men on the farm and delivering meals to the field during harvest. She also kept busy with all her children's activities, her church club, and Catholic Daughters. She was a member of Lowell Homemakers Club from 1957 to the present, and an active volunteer for the past 35 years in the Villa St. Vincent Auxiliary, serving as president for 6 years. She also held membership with the Eagles Club and was a lifetime member of the VFW. Gladys was a hockey fan from the time she could skate at an early age. She was an avid bowler for over 40 years. Cecilia Plante, a good friend, and Gladys, started the Red Hat Chapter in Crookston/Gentilly, known as the C & G Red Hatters. Gladys loved the colors red and purple and wore them proudly. She loved going to the casino with her friends and also enjoyed reading and playing cards. Most of all she enjoyed being with her children, grandchildren and great grandchildren who affectionately called her Grandma GG. She seldom missed any of their activities and always had a twinkle in her eye when speaking about them, which she often did. Gladys and Robert were fortunate to do a lot of traveling over the years, whether it be on bus trips, or with friends and family. They spent 2 years wintering in Arizona and 27 years in Weslaco, TX. Sadly, Robert passed away on January 21, 2005, and her son, Tommy, on November 15, 2006. Gladys continued to live on the farm until March, 2013 when she moved to the Summerfield Apartments in Crookston. Her calendar was always full of activities and her family joked that they had to call her just to make sure she was home so they could come and visit. Left to mourn Gladys are her children: Timothy (Beth) Boucher, Mark Boucher, Margaret "Peggy" (Rick) Chaput, Kristie (Tim) Palmer, all of Crookston; grandchildren: Erica (Dusty) Uttermark, Crookston; Andrea (Randy) Kraft, East Grand Forks, MN; Bryan (fiancé, Jenny Dubay) Boucher, Brainerd; Kelsey (Zachary) Johnson, Thief River Falls; Monique (Jared) Hollands, Crookston; Dylan Boucher, Duluth, MN; Mykl Palmer, Crookston; great grandchildren: Jayde and Korynn Uttermark, and Odin and Augusta Johnson; step great-grandchildren, Nathan, Julie, Sarah, and Jacob Kraft, East Grand Forks, MN; sister, Beverly (Gayle) Becklund, Baudette, MN; and many nieces and nephews. Also surviving are her four Godchildren: Diane (Hanson) Rice, Mary (Boucher) Pierre, Jerry Paulson and Kelly Ricard-Koerner. Gladys is preceded in death by her husband of 49½ years, Robert; son, Thomas (Tommy); parents, Helmer and Margaret; brothers: Clifford Olson, Raymond Olson and Vernon Olson; and sister, Helen Arthur. Gladys will be sadly missed and lovingly remembered by her family and friends. Mass of Christian Burial for Gladys Boucher will be held at 2:00 p.m., Thursday, September 22, 2016 at the Cathedral of the Immaculate Conception in Crookston. Visitation will be at the Stenshoel-Houske Funeral Home on Wednesday from 5-7:00 p.m., with a 7:00 p.m. prayer service, and also at the church for one hour prior to the funeral. Interment will be in the Calvary Cemetery, Crookston.

To order memorial trees or send flowers to the family in memory of Signe Boucher, please visit our flower store.