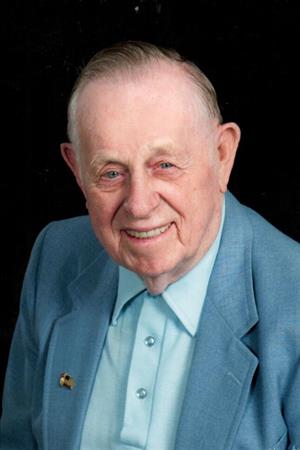 RUSSELL STANFORD SUNDET July 28, 1917 – December 16, 2016 Russell Sundet passed away peacefully on December 16, 2016 at Riverview Memory Care in Crookston. He was 99 years old. Russ was born on July 28, 1917 in Crookston to Ole and Beata "Bertha" (Morgan) Sundet, the 3rd of 4 children, and baptized and confirmed at the former English Lutheran Church. He attended Central High School where he played both offensive and defensive guard in football, and graduated in 1935. While in high school he worked at the Lyric and Grand Theaters. Russ volunteered into the U.S. Army in 1942 and attended basic training at Hammer Field in Fresno and placed into the Engineer Corps. After training Russell was transferred overseas to Burma as part of the 1891st Engineer Aviation Battalion in the U.S. Army Corps of Engineers. In 1944 he travelled over the Burma Road to China and the home of the Flying Tigers. He served as 1st Sergeant, building forward airstrips and bridges. In 1945 Russell returned to the U.S. and was Honorably Discharged in 1946. After meeting in a blind date, Russell and Helen Mae Schmidt were married on June 21, 1949. They had two children, Richard and Judy. Sadly Helen passed away on November 22, 1998. After returning to Crookston from the Army, Russell went back to work as manager of the Lyric, Gopher and Grand Theaters. In 1958 he opened "Sundet's Toy and Hobby Shop" and continued for that first year to work at the hobby shop during the day and theaters in the evening. He was "the hobby shop man" to many generations of Crookston children, keeping them well supplied with school supplies, toys, models, and lots and lots of candy. He loved to pull tricks and gags on the children and adults alike that entered his shop, and magically pulled coins out from behind many ears. He sold the shop and retired in 1980. He also worked as a professional photographer from the late 1940's to early 1960's, including photographing and designing family Christmas cards and developing them in the basement of his home. Russell was considered a local historian of events in the Crookston and Red River Valley area. Between 1987 and 1995 he wrote numerous articles for the Golden Link monthly newsletter, several of which were also published in the "Red River Valley Memories." In 1998 Russ purchased his first computer, which led to the compilation of his stories into a small book entitled "Reminiscing with Russ," with about 300 copies distributed to friends and relatives. Around this time he also taught himself the Norwegian art of rosemaling, spending many hours in the basement creating pieces from wood which were later transformed into works of art. He took great joy in presenting these pieces to everyone he knew. Both Russ and Helen loved to travel and attended several reunions of the 1891st Engineering Battalion. They also made numerous trips to Alaska, the West coast, the East coast, and Disney World. After retirement they spent most of their summers at Lake Sarah where Russ found plenty of projects to work on. Russ was very proud of his hometown of Crookston and served on numerous boards and committees, including the City Council as Alderman of the First Ward from 1969-74, Chairman of the Polk County Library Board, Building Chairman of the new library, Chairman of the Board for Polk, Norman and Marshall Counties Boy Scouts, Advisory Committee for the Northern Lights Boy Scout Regional Council, Valley Crossing Arts Council, "Art in the Park", President of the Model Airplane Club, and President of the Crookston Collector Club. He was considered an expert in rare coins and stamps, and often called upon by estates to estimate the value of stamp and coin collections. In addition he arranged the start-up of the Girl Scouts in Crookston in the early 1970's, assisted the City of Crookston during numerous flood fights, and taught classes on Bible archeology. Russ was honored as "Outstanding Volunteer" in 1984 and "Experienced American in 1989. He was long-time member of St. Paul's Lutheran Church. He was never afraid to learn something new no matter how challenging. But Russ will perhaps best be remembered for his sense of humor and jokes, some good and some not so good and some that leave the recipient wondering why he even remembered such a joke. He will be greatly missed by all whom he touched. Russell leaves behind his son Richard (Kathrin) and their two sons, Tomas and Jamie of Anchorage, Alaska; daughter Judy (Sundet) Keasler and her son Lyon of Crookston; sister Maxine Sundet of Crookston, and many nieces and nephews. He was preceded in death by his parents, sister Alice Smith, brother Wallace Sundet, his loving wife Helen, and son-in-law Gene Keasler. The family would like to extend a special thank you to all the care givers at Riverview Memory Care for their years of caring for Russell. There will be a memorial service at 10:30 a.m with a visitation starting at 9:00 a.m. on Wednesday, January 11, 2017 at St. Paul Lutheran Church in Crookston, MN. Inurnment will be at Oakdale Cemetery in Crookston, MN in the summer.

To order memorial trees or send flowers to the family in memory of Russell Sundet, please visit our flower store.