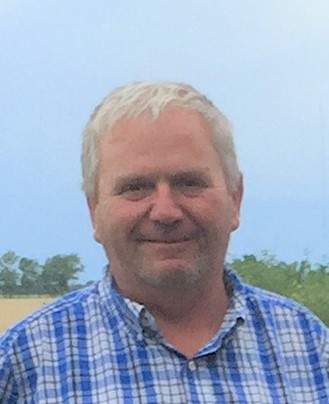 Ronald Allen Stroot “Ron/Ronnie”, 63, of Euclid, MN, passed away at his home on the farm on Tuesday morning, November 19, 2019 with his family right by his side. Ron was diagnosed with stage IV renal cell sarcoma on July 19, 2019 and the cancer had already metastasized into his liver and lungs upon discovery. Ron courageously fought a hard fight with the odds being against him the entire time, but somehow managed to stay positive and keep his humor through it all.

Ron was born on February 28, 1956 in Crookston, MN to Wanda (Wallace) and William “Bill” Stroot. He grew up in Euclid, MN never straying too far from the family farm. Ronnie was baptized and confirmed at St. Mary’s Catholic Church in Euclid. He attended Central High School in Crookston, MN and in later years, earned his GED. He was married to Donna Schulz on October 22, 1977 in Crookston, MN. Together they raised two children: Craig Allen and Erica Lynn. Ronnie began working for E.W. Wylie (later known as Transystems, LLC) in 1977 as a loader operator and enjoyed twenty-eight years with the company. While he was working for Transystems, Ron also farmed with his brother Duane Stroot from 1981-1988. He sure did love farming and everything that goes with it. He would proudly tell his grandchildren that he had dirt in his veins and to be careful because it was hereditary. Over the years he has helped his neighbors with farming, his son, Craig, on RCS Farms and just this last year his grandson, Castor. In 2005 Ronnie began work with Minn-Dak Asphalt, Inc. as a truck driver. He attempted retirement in 2015, but then decided to work again for a few more years beginning in 2016 at Fleet Distributing Supply in Crookston until October this year, due to his declining health. Ron didn’t always work though, he played a bit too. In his younger years you could always find him at a party, enjoying good beer and great company. He enjoyed being outdoors, hunting, gardening and yardwork. He was a lifelong fan for the Minnesota Twins and Vikings. Ron loved to visit. Reminiscing and telling stories was one of his favorite pastimes. He absolutely loved going for drives around the countryside to see what the neighbors were up to and to check out all of the crops in the area. Family was more important to him than anything, even his extended family. He sure loved hosting family reunions on the farm and visiting with everyone. “Papa,” as the grandkids tenderly referred to him, loved to go to all of their school and extra-curricular activities. He rarely missed his grandson, Ethan’s, hockey games – even travelling to the out-of-town games to show his support as his number one fan. Watching his grandson, Castor, play the drums and guitar was always intriguing and exciting for him. In recent years, he’s especially enjoyed going to his granddaughter, Avery’s, dance recitals. Watching her dance put the twinkle in his eye. Ronnie was a very, very proud papa. Ron was a kind, generous and compassionate man. He always made time for others. He was down to earth, honest, and incredibly humble. He liked the simple life and he lived it his way. Ronnie was adored by all who knew him and will be remembered always. He will be missed immensely, and by many.

To order memorial trees or send flowers to the family in memory of Ronald Stroot, please visit our flower store.